The Dallas Cowboys' game-winning field goal in a 27-24 win over the Washington Redskins maybe should not have happened, depending on how far you want this logic to stretch. This requires a lot of hypotheticals, so bear with me, but thanks to Mike Shanahan calling an "ice the kicker" timeout, the Cowboys ended up being saved from themselves.

Let's walk through this step by step.

But unbeknownst to Shanahan, the Cowboys had some major issues as well. They didn't get the right people on the field, and the play-clock continued to tick down. Faced with a potential delay of game penalty, Tony Romo then signaled for a timeout. The only problem? The Cowboys had none left. 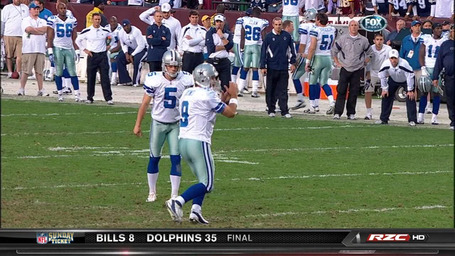 It's clear as day that Romo is trying to call timeout. However, because Shanahan had prepared to call a timeout himself, the referees awarded the Redskins the timeout and negated the Cowboys' instability. One play later, Bailey barely hooked the field goal in past the right upright for the game-winner.

Had Shanahan not called for timeout, the Cowboys would have been called for a five-yard penalty for excessive timeouts, according to the NFL rulebook. If that field goal is kicked from five yards further back, it would have probably missed. Makes you wonder why coaches stick to the "ice the kicker" philosophy in the first place.