Cowboys Vs. Redskins: A Productive Loss For Washington, And ... Hey, Robert Griffin III And Matt Barkley!

The Washington Redskins' loss to the Dallas Cowboys stings, but the fact that the game was competitive shows the rebuilding project is underway. And hey, how about those college quarterbacks on Saturday night?

Share All sharing options for: Cowboys Vs. Redskins: A Productive Loss For Washington, And ... Hey, Robert Griffin III And Matt Barkley!

Oh sure, the Washington Redskins players are upset now. That's always how it is when you suffer the kind of loss to a bitter rival the Redskins did on Sunday when they fell, 27-24, to the Dallas Cowboys. The faces and words were from a group of players who are tired of losing, fought their hearts out and came so close to tasting victory, only to end up having the game decided by a few feet on two kicks.

All of that is understandable for the players. For fans and others in the organization, though, Sunday was a good day. The pain of the loss may linger, but soon, the silver lining will be seen by all. Maybe it'll happen on Wednesday, as quarterback Rex Grossman suggested. Maybe it won't truly be seen until next spring. At the end of the day, though, something tells me those silver linings will eventually be realized by all.

First: the big picture. The Redskins played a competitive game against a very good team while using several players that will factor into their future. They did all of this without sacrificing position in the 2012 NFL Draft; in fact, thanks to a wins by the Miami Dolphins and Philadelphia Eagles, the Redskins actually improved their position. All this came one night after Baylor's Robert Griffin III and USC's Matt Barkley put on shows in huge wins over top-10 teams. That potential franchise quarterback in the 2012 Draft seems closer than ever.

Digging deeper, there were some very promising performances by key youngsters in the loss. Linebacker Perry Riley, finally receiving an opportunity to play, made some big plays in the run game and generally played well. Yes, he was beat on the go-ahead touchdown by Jason Witten. Yes, he'll learn. Rookie safety DeJon Gomes also got the start and had his moments, especially in the run game. Rookie running back Roy Helu continues to impress when he receives the time. The patchwork offensive line, featuring a practice-squad left guard, did its job protecting Grossman. These are elements that helped make this game competitive.

In general, the Redskins' 2011 draft class has shown plenty of promise. There's very little to say about Ryan Kerrigan's brilliance that hasn't been said already, but Sunday's performance cemented the reality that he's already the best player on the defense, outside of maybe London Fletcher. Helu, the fourth-round pick, is already the best running back on the roster. Jarvis Jenkins and Leonard Hankerson, the second- and third-round picks, showed brief flashes of brilliance before suffering season-ending injuries. Fifth-round pick Niles Paul, now injured, is already the team's second-best special teams player. Seventh-round pick Chris Neild had another sack on Sunday. Gomes, a fifth-round pick, is good insurance in case LaRon Landry's contract demands are too high. Seventh-round pick Maurice Hurt has already filled in along the offensive line. That's eight of 11 players who contributed this year.

And then there's next year. Maybe the Redskins are out of the Andrew Luck sweepstakes, but as Saturday proved, Griffin and Barkley are more than just consolation prizes. The 2012 quarterback class looks like it will be far better than the 2011 class, one that Mike Shanahan ignored. As the losses kept piling up this season, that decision has come back to haunt Shanahan. But after what those two quarterbacks did what they did on Saturday night, you can see the logic in Shanahan's decision to kick the can down the curb with the quarterback and try to address other parts of the roster. There's a lot of pressure on Shanahan to find his quarterback in next year's draft, but there certainly are options. (And yes, for many, many reasons, I prefer Griffin to Barkley. But that's a subject for another time).

All these are baby steps, of course. Celebrating baby steps is the sign of being a fan of a losing team, and therefore this is all easy to mock by those high-horse fans of winning squads. But let's face it: this has been a losing franchise over the last two decades. We're used to giant steps backwards. If baby steps forward are made, I'm damn sure I'm going to note them.

Eventually, those baby steps need to become bigger, but that is not a discussion for today. As 106.7 The Fan radio host Danny Rouhier tweeted: 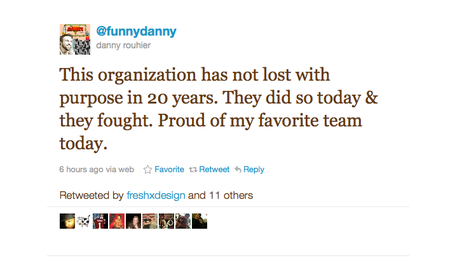