There are very few players I root for more on the Washington Redskins than defensive lineman Stephen Bowen. This story pretty much shows why.

On Thursday, the team announced that Bowen received the team's Ed Block Courage award, given to the player who perseveres through the most adversity on the team. The honor is well-deserved, because Bowen has been dealing with the health issues of his two children, who were both born prematurely in June. One of them passed away, while the other survived. Bowen took regular trips to a Dallas-area hospital until September, even after signing with the Redskins. Despite all this, he has put together arguably his best season as a pro.

It's impressive. But this strikes me as even more impressive on a different level. 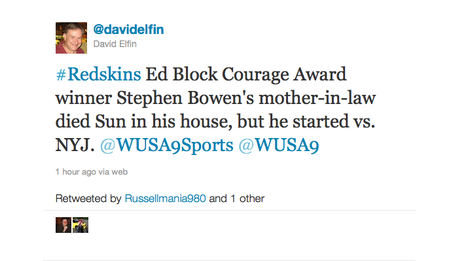 I'm still not sure how Bowen was able to do that. It would have been perfectly understandable for him to not play. Instead, he played and played well like he has all season.