Today is Valentine's Day, as you probably heard, and hopefully you're not one of those people scrambling to figure out plans to spend time with your significant other. All throughout the day, D.C. athletes have been celebrating Valentine's Day on Twitter too. When you combine athletes with love, women and a day like Valentine's Day, you're bound to get some really entertaining things coming out.

And indeed, this has been an amusing day to follow all of D.C.'s athletes as they share their philosophy and their experiences dealing with love. It's a reminder that athletes are just like us, except with many more women wanting to be their Valentine.

So without further ado, our five favorite D.C. athlete Valentine's Day tweets of the day.

5.  Jason Clark gets a mysterious gift

Jason Clark is one of the big stars on the Georgetown basketball team, which means a lot of people on campus know who he is. So it's not hard to believe that one girl would drop off a special Valentine's Day card.

This is what was outside my door..and it doesnt say from who lol http://plixi.com/p/77349807less than a minute ago via ÜberTwitter

An anonymous gift? Well that kind of defeats the purpose of a Valentine, doesn't it? Wouldn't Clark want to know who got him this nice teddy bear? 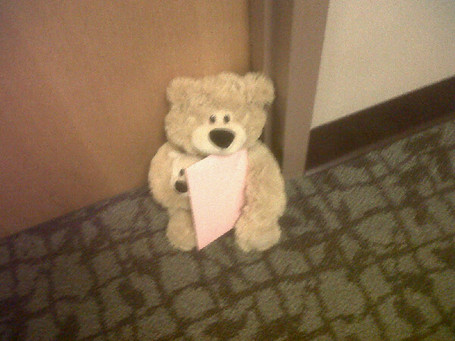 If you take a look at Google Trends right now, you'll see a lot of searches for restaurants, as well as "free ecards for Valentine's Day" and, more simply, "Valentine's Day dinner ideas." These are mostly from people who have procrastinated on their duty to their significant other. Anthony Armstrong doesn't get it either and decided to vent a bit about it.

Just saw about ten dudes at the greeting cards. #lls gotta love procrastinationless than a minute ago via Plume

I don't get it either, Anthony (* looks up Valentine's Day ecards).

We think a lot about the act of buying a Valentine's Day gift, but what about the people who sell them? Maryland defensive tackle A.J. Francis wonders about them and poses a question to his followers.

I'm going to be thinking about this one all night.

LaRon Landry is famous in the Twitter world for posting pictures of himself working out and the meals he eats before he works out. "Meat 'N Potatoes" is a rallying cry for him. So you were probably wondering how he'd tie that in to Valentine's Day. Worry no longer.

Thanks olympia(weights) for being my valentine... I'm gonna rough you up...lolless than a minute ago via Twitter for iPhone

That's probably the most LaRon Landry Valentine's Day tweet ever.

We already mentioned Francis once, but he was so consistently entertaining over the past couple days that we had to mention it again. The running joke with him, of course, is that he is a big man as a defensive tackle. So it's only fitting that he decided to celebrate Valentine's Day in this way:

In honor of my homie @Fatboi_Swag on this glorious Valentines Day, i will order at least 1 #HeartShapedPizza and polish it off by myself lolless than a minute ago via TweetDeck

He's referring to Lamar Young, who left the team last spring. We can only sit here and wonder what the significance of Francis' act of honoring Young may be.