Last week we started going through some of the key free agents the Redskins will have to make tough decisions on. I went through why the Redskins should bring back Santana Moss, and it looks like the Redskins decided to listen to my advice (NOT). This week we’ll look through two more intriguing names on the roster that also happen to be free agents: Rocky McIntosh and Jamaal Brown.

McIntosh was one of the players who was probably hit the hardest when Mike Shanahan made the decision to go from a 4-3 base defense to a 3-4. There was some confusion early about whether McIntosh was better on the inside or the outside. The decision was made that he would man the inside along with middle linebacker London Fletcher.

The decision yielded mixed results. On the bright side, McIntosh finished second on the team in tackles with 110 and even had two sacks to his credit. He had moments where he showed flashes of his prior successes in the 4-3, particularly when it came to applying pressure on the quarterback.

Unfortunately for McIntosh, when he struggled, it wasn’t always the most pleasant thing to watch. There were several moments in games this year where he was caught out of position repeatedly. Whether it was covering a tight end or a running back coming out of the backfield, McIntosh looked a step slow at times in the new scheme. Whether that was because he was adjusting to the 3-4 or because he was simply put in a position that exploited his weaknesses (specifically coverage), there were some moments during the season where he simply looked bewildered.

What may be the most ironic thing about McIntosh’s 2010 season was that while he finished second in the team in tackles, he may have actually have been the second worst tackler on the team this season behind Kareem Moore. He was far more consistent in years past, but for some reason, he had a hard time wrapping up ball carriers this year. That’s not a good sign for any linebacker.

So Should He Stay Or Go?

The 28 year old linebacker walks into free agency on iffy ground. He's still a solid player, but he probably is more suited for a 4-3 scheme rather than Jim Haslett's 3-4. There were some real struggles this year for Rocky, some of which may be too glaring for the coaching staff to believe he could improve next season.

Not only does a so-so performance this season hurt McIntosh, but the potential emergence of his replacement could be one of the main factors as to why he could be a goner. Rookie linebacker Perry Riley didn't get much playing time at that inside linebacker spot this season, but when he was in there, he showed some flashes of someone who could eventually start somewhere down the road. I wouldn't be surprised if the Redskins truly view Riley as the long term option at that position. That, along with spotty play from McIntosh, may be enough to convince the Redskins front office to let McIntosh walk in free agency.

Given that the Redskins need more players who can effectively play in this 3-4 scheme, letting McIntosh go is probably the right move to make. 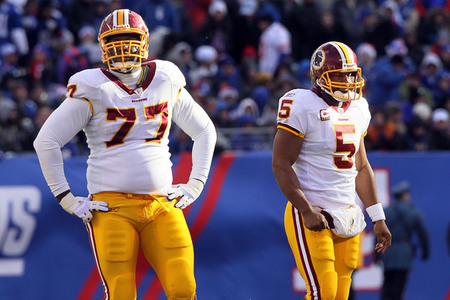 Brown's season did not start the way he nor the Redskins wanted. After trading what was ultimately a 2011 third-round draft pick, the Redskins expected Brown to solidify the right tackle spot and be set at both tackle positions for the next few years.

But Brown was coming off a severe hip injury that caused him to miss a significant part of the 2009 season, and through the early parts of 2010, it looked like he was still trying to get healthy. Mike Shanahan would limit both Brown's practice and playing time, having him alternate offensive series with backup tackle Stephon Heyer.

When he was in there early in the season, he seemed to look hobbled by that hip, unable to move as laterally as he used to back in his days with the New Orleans Saints. The Redskins would often give Brown help on his side, in both run blocking and pass protection. They would also tend to run more behind Trent Williams, his left tackle counterpart, rather than on Brown's side.

But as the season went on, it was becoming clear that Brown was both improving in the scheme and getting healthier. He improved his pass protection (though it wasn't always his strength), getting beat at the line of scrimmage less often than in the first half of the season. But it was his biggest strength, run blocking, that improved the most as the season went on. Brown helped pave numerous holes for Redskins running backs (particularly Ryan Torain). The Redskins began leaning towards running to his side during the final four games of the season, which proved to be more effective than running behind Williams.

Although his season started out rocky, it looks like Brown got healthy by the end of the season, and in the process showed he can potentially still be the player he was in New Orleans.

So Should He Stay Or Go?

A common theme for Washington this offseason is going to be that they already have a ton of holes as it is, and letting certain players go in free agency without an obvious replacement will only add to an already long list of needs. This is definitely one of those cases.

The Redskins know they need to improve on both the offensive and defensive lines. By keeping Brown, they get a guy who is already comfortable with the offensive system, showed that he got healthier as the season went on and can provide some veteran leadership to an offensive line that is still searching for an identity.

They shouldn't  invest in him simply to justify giving up a mid round draft pick, but because he showed he could do an adequate job at that position and can hopefully lock it down for the next few years. Brown will be 30 next season, and if re-signed, could help the Redskins solve that position for a little while as they continue to hammer away at other critical needs on the team.

The Redskins hopefully realize that they could do a whole lot worse than Brown, and as such, should consider bringing him back for 2011 and beyond.