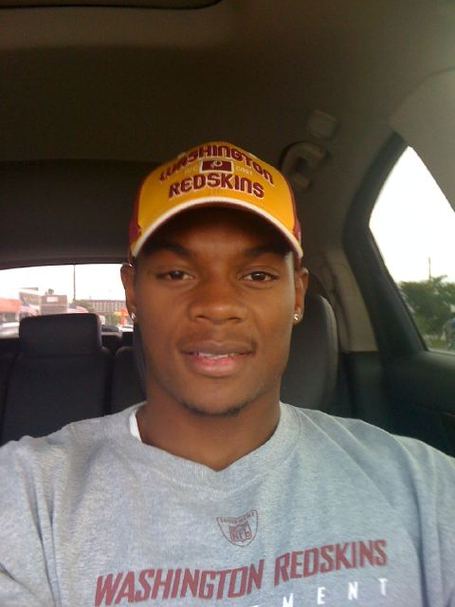 In just one day, wide receiver Leonard Hankerson has done quite a lot to celebrate being a member of the Washington Redskins. The team's third-round pick in the 2011 NFL Draft just sent out this photo on his Twitter account of him sporting Redskins gear while driving around.

There's a story behind this too. Hankerson joined Doc Walker on ESPN 980, and explained that it was destiny, so to speak, that he ended up with the Redskins.

"A couple of months ago, my daughter took a picture with a Redskins helmet on, and then earlier yesterday, my buddy is a big Redskins fan, and he was like 'I'm going to take all this Redskins gear out of the closet just in case they draft you.''

That's probably the gear he's talking about. Anyway, later in the interview, Walker grilled him on his feelings on the Dallas Cowboys, and Hankerson answered correctly.

That's the spirit! I love this guy already.

"It doesn't matter where you get drafted. It matters what you do after that. Me being a Redskin now, I can't wait to report to Washington and do my job."