2011 NFL Draft: Washington Redskins Must Use Pick On Defensive Player

The Redskins have many needs to fill in the 2011 NFL Draft, but none is bigger than the need for more defensive talent in their 3-4 defense. Von Miller would be ideal.

Share All sharing options for: 2011 NFL Draft: Washington Redskins Must Use Pick On Defensive Player

Most outside observers of the Washington Redskins realize the team has a boatload of needs they have to address on both sides of the ball this offseason. It really isn’t difficult to see just what those needs are. All you need to do is turn on last year's game tape, and their roster holes will show up clear as day. There's a reason why so many different kinds of players are showing up in the latest 2011 NFL mock drafts.

On offense, the team fielded an offensive line that never really gelled as the season went on. The Redskins had some guys who were a fit for the system, such as rookie Trent Williams, but there were also some like Derrick Dockery and Artis Hicks who had become the odd men out by season’s end. In the final few games, the interior of the line was being manned by two natural centers playing at the guard positions (Will Montgomery and Kory Lichtensteiger) and the inconsistent Casey Rabach at center. It's probably safe to say the Shanahans would probably want to play lineman who play their natural positions, much less ones who can play at a high level.

But of course, the line isn’t the only issue with the team’s offense. The decision to bench quarterback Donovan McNabb at the end of last year sent such a strong message to the team and it's fanbase about the status of that position. Not even a "Help Wanted: Quarterback" sign outside of Redskins Park could have made it any clearer.

And yet, given those needs on offense (without even mentioning the skill positions), it would still serve the team best to draft a defensive player with their first round pick in this upcoming draft. 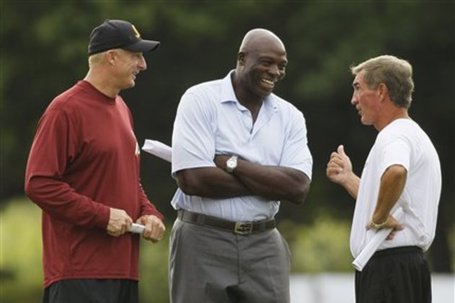 Let's face it: Jim Haslett’s 3-4 defense didn’t exactly go as planned last year, with the team finishing 31st in total defense. Not only that, but they didn’t exactly find a ton of answers going into 2011 and beyond along the front seven in particular. Brian Orakpo is the obvious stalwart of this group, leading the team with 8.5 sacks from the outside linebacker position. Other than him, you didn't see great play from any of the positions that make the 3-4 successful.

When you think about what makes this scheme work, there are three big necessities along the front seven. Unfortunately for the Redskins, they have none of them right now. They don't have that all important space-eating nose tackle. They don't have an impact defensive end who can clog running lanes and get pressure. Last, but not least, they don't have an outside linebacker opposite of Orakpo who can help wreak havoc on the quarterback (and make Orakpo's job easier). Put all that together, and it's no wonder the Redskins finished where they did in the defensive rankings.

That should make the draft strategy pretty simple for the Redskins in the first round. They must grab a linebacker, defensive end or nose tackle. If they can address one of these positions with the first pick (and perhaps the others with later picks), it'd do wonders to improve this defense in a hurry.

Luckily, they will certainly be at an advantage, as there are plenty of young studs in this draft that could help the Skins. With offensive players such as Cam Newton, Blaine Gabbert, Julio Jones and A.J Green raising their draft stock, the Redskins will hopefully have one of the top defensive studs fall to them.

The absolute dream scenario for Washington would be for Texas A&M linebacker Von Miller to somehow fall to the 10th spot. He is regarded as the top outside linebacker in this draft, and would be a perfect match opposite Orakpo. Haslett's mouth has to water when he thinks of the possibilities of pairing those two together for years to come. Before you completely write that possibility off, just remember that Orakpo was never expected to fall to No. 13 in the 2009 draft. But then the Jets traded for Mark Sanchez, the Raiders drafted Darrius Heyward-Bay and the Bills drafted Aaron Maybin. Just like in any draft, unpredictable things are bound to happen. Because of that there will always be the slight possibility of a player like Miller falling.

But if Miller is not there (the likely scenario), there could still be a good amount of top linebackers available. Akeem Ayers out of UCLA and Justin Houston out of Georgia (who had 10 sacks as a junior) are still solid options at that position, though obviously not as talented as Miller.

Even if they don't like any of the available linebackers available, there are some top notch defensive ends are also expected to be available when the Skins are on the clock. Da’Quan Bowers out of Clemson, who had a whopping 15.5 sacks in his junior year, is a player whose draft stock has been falling a bit since the process began, but would be a huge value pick for the Redskins if available. He has the size (280 pounds) and athleticism to fit that 3-4 end spot quite nicely. But even if he's taken, there is Wisconsin end J.J. Watt, who has a similar frame as Bowers. Although he is not as quick or athletic as Bowers, Watt is still a highly regarded prospect in his own right.

But possibilities don't end for the Redskins. No, if there isn't anyone who grades out to their liking at the 10 spot, they could have the option of doing what most fans and observer would love to see them do: trade down in the first round to acquire more picks and still get a player they covet.

Should they fall back in the draft, a player worth watching would be Baylor defensive tackle Phil Taylor. He has the exact frame (6'3'', 334) you'd want out of a prototypical nose tackle. His stock has been rising ever seen the Senior Bowl, and he is projected to go in the late-first or early-second round. A player like him would make total sense for the Redskins. 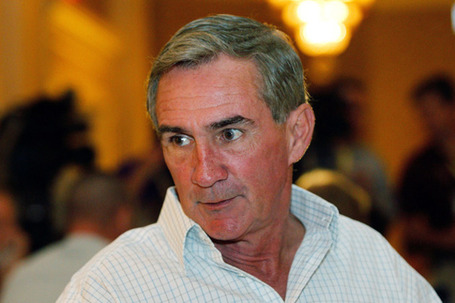 This will certainly be one of the most important drafts in recent memory for the Redskins. This is the second one under the new regime, with their true draft philosophy still unknown to most Redskins faithful. Most fans believe that the team needs to show a commitment to drafting well and bringing in players who fit the schemes they are trying to run, rather than bringing in past their prime veterans to try to plug holes.

This draft will give the Mike Shanahan and the Redskins plenty of opportunities to show the fans that those days are long gone and that they are now committed to the long-term success of the franchise. That starts with vastly improving a 3-4 defense, one that Shanahan chose to start running a year ago, with young players who could excel in it for years to come.

Let's hope they can take advantage of this opportunity.