The Washington Redskins are getting criticized everywhere for not taking a quarterback in the 2011 NFL Draft. Here's why that criticism makes little sense to us.

Share All sharing options for: Washington Redskins Draft Results Don't Include A Quarterback, And That's Fine

In a NFL Draft where it seemed like the Redskins were making draft choices for an eternity, the real moment of truth came very early. As the Redskins prepared to make their first draft choice at No. 10 overall on Thursday, Blaine Gabbert was sitting right there, looking to be the latest shiny toy paraded in front of everyone at Redskins Park. Gabbert was a quarterback, a position the Redskins desperately need now and have needed since 1991, he was well-known and, let's face it, he was actually shiny, with long golden locks and a polished face that make it seem like he is the real-life version of the actor who played Ronnie 'Sunshine' Bass in Remember The Titans.

He was there for Mike Shanahan and company to take. Instead, Shanahan traded down and got a relatively anonymous hybrid defensive end/outside linebacker named Ryan Kerrigan. He then traded down again, and again, and again, and over the next two days, the quarterback position was never addressed. Analysts howled in disbelief, and Shanahan himself elected to kick-start the public campaign for John Beck, which sounds completely ridiculous except for the fact that Shanahan is exactly the kind of guy who would trot Beck out under center come next September.

Twelve picks, no quarterback. It's stunning, if you think about it. Shanahan's certainly done some daring things in his NFL career, but this has to rank right up there with all of the things he's one before. It was certainly bold. But was it right?

Time will tell, of course. But if you just judge the thought process, I think it was. I certainly think Shanahan was right to pass on Gabbert, and while I could see the argument that Shanahan should have taken a quarterback with one of the late picks, I'm not going to lose much sleep because the Redskins didn't end up with Tyrod Taylor or Greg McElroy. 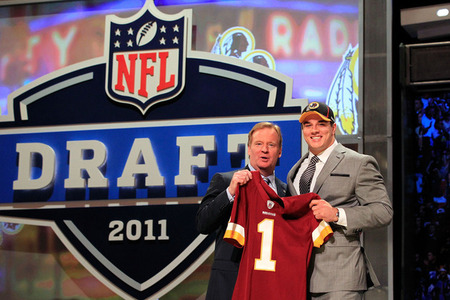 The thing the Redskins needed most in this year's draft was certainty. Even more than talent, finding guys who you know fit exactly what you want to do scheme-wise was a must. After a wasted season in which Shanahan, his son and defensive coordinator Jim Haslett kept unsuccessfully jamming the square pegs they inherited into round holes, the Redskins couldn't afford to draft talent that didn't fit with the way they play.

If you notice, all 12 of the Redskins' draft picks are a certain type. Kerrigan is the kind of pass rusher from the outside linebacker spot that the team needs. Jarvis Jenkins is a bit undersized and may have been a reach, but he slots in perfectly in a two gap or as an end. Leonard Hankerson fills a big need a wide receiver. Roy Helu and Evan Royster are one-cut runners. DeJan Gomes, Niles Paul, Aldrick Robinson, Brandyn Thompson and Markus White project to be great special teams players, something Shanahan values tremendously. All are hungry, all want to be here and all are willing to do anything to help the team.

The problem with picking Blaine Gabbert is that it's the ultimate dice roll. Picking a quarterback in the first round is always a boom or bust proposition. Get the right one and develop him correctly, and you have your franchise quarterback. Get the wrong one and develop him poorly, and you have JaMarcus Russell, David Carr, Tim Couch or any number of past failures. When you're picking in the top 10, it's usually an either/or situation. There are that many players that turn out somewhere in the middle.

Gabbert could be that franchise quarterback this team will eventually need to be a championship-caliber team. But he could also flop tremendously behind a roster that will make like difficult on him at this point. If Gabbert ends up doing that, the Redskins will have wasted a top-10 pick, and a roster that desperately needed certainty and depth will have eliminated one more dart from their arsenal. For this team, at this point, the risk of missing on a franchise quarterback was simply too great.

As for not taking one later: sure, there's probably not much to lose if Shanahan chose to use one of his 12 darts on the position. But he got victimized by Andy Dalton, Christian Ponder and Colin Kaepernick going higher than expected, and using a pick on Ryan Mallett, however talented he was, wouldn't have been smart given this situation. The Redskins shouldn't have sacrificed picks for a QB, and they didn't. Sure, they could have taken one in the fifth, six or seventh round, but most of those guys don't do anything. Tom Brady is the exception. Colt Brennan is the rule. 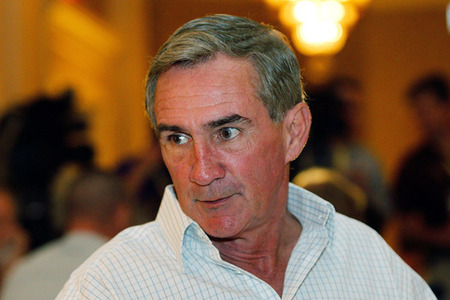 At the end of the day, there are criticisms you could make about the Redskins' draft. The fact that they did almost nothing to fix their horrible offensive line is a major problem. But the criticism that they should have drafted a quarterback just doesn't make much sense to me.