Bruce Allen has pledged that the Redskins will be "active" in free agency once the lockout is lifted. Before you fret, though, realize that this year's strategy will probably be different than in past years.

At this point, the NFL Lockout feels like having your favorite TV drama end the season with a shocking cliffhanger and being left to figure out what to do every week during the four-to-five months till the start of the show's new season. For Redskins fans (and NFL fans in general), that cliffhanger is the current labor negotiations/litigation that is ongoing until (more than likely) late June or July, with the hope of a CBA being agreed to shortly thereafter. This has left fans and media in a state of limbo, wondering what course the Redskins will take once they are allowed to make roster moves again. It appears that the team is rebuilding, but the free agency period has yet to occur, so the Redskins true intentions won't be known until then.

That being said, Redskins fans and observers certainly can look to the team’s 2011 NFL Draft haul as a sign of progress, with the team choosing to trade down relentlessly until they had, as Bruce Allen called it, "a draft and a half"-sized draft class.

So what will the team's free agent outlook be? This past weekend, Allen gave some insight as to what the team’s free agent strategy could be once we have football again:

"I think the draft is our statement of our game plan. We added 12 players who are going to infuse youth into every position on our team."

With fans wondering just how aggressive the team will be in free agency, quotes like this one should serve as a clue to what the team could do once free agency arrives. It certainly wouldn't be surprising to see the Redskins be major players in the free agent market again this offseason. 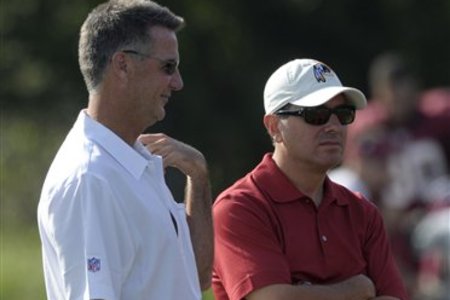 Now wait a second, Redskins fans. Before you get up and arms over the thought of the Redskins being 'active' in free agency again, remember that this is now Bruce Allen and Mike Shanahan running the show, not the prior regime.

What does that mean, exactly? Take the one move they did make just prior to the lockout, for example. They signed former Rams safety O.J. Atogwe to a five-year, $26 million dollar deal with roughly $9 million in guarantees. Those numbers are a far cry from the types of contracts the Redskins would hand out in the past. They brought in a quality veteran at market value all while getting a substantial upgrade at the position. Could he be a bust? Sure, but the Redskins have make sure this won't be an expensive bust, as we've seen so many times before.

Something else to consider regarding the Redskins potential spending spree is that they cleaned up a ton of bad contracts over the last year and a half to be in a position to go and get quality players in free agency without worrying about salary cap ramifications (whenever there is one).

So it's quite simple, really: The Redskins will likely emulate their draft strategy, which stressed volume, more than anything. They'll do it by spending huge money on a large number of players, rather than spending huge money on one or two players as they did in the past. Add that to the fact that it seems like the team is now focused on getting younger, high character individuals without overpaying for their services. If they truly do employ this new strategy, you could see the team really make big strides in certain areas of the roster (quarterback notwithstanding) in a hurry.

So when the team is spending big money this offseason, don't fret, Redskins fans. You're likely to see more Atogwes coming to town than Haynesworths. Whether or not they employ this 'new' strategy or not, one thing's for sure: when it's all said it done, the 2011 Redskins will wind up looking nothing like the 2010 version.