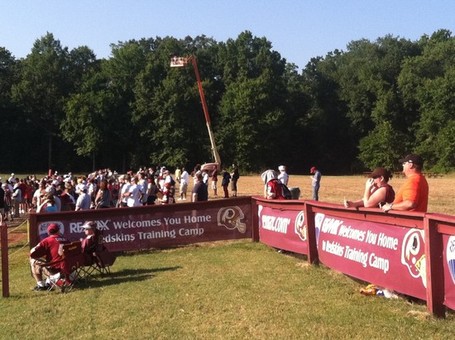 For the past decade, Ashburn, Va. has been the site of Washington Redskins training camp, where thousands of burgundy-and-gold faithful have come from all over the greater D.C. area to get a preview of the team. This year, change "thousands" to "hundreds." Sparse crowds have been showing up where large throngs usually come to see the Redskins practice.

This made Joseph White of the AP curious, so he wrote a story about the lack of attendance at this year's camp, and how that may be indicative of overall declining popularity of one the NFL's flagship franchises.

Of course, even waning team popularity couldn't possibly account for all of the staggering decline in attendance from last year to this year. With the four-month lockout this offseason, the Redskins were unable to promote their training camp or release its schedule until it began last week.

Still, this, combined with the recent removal of FedEx Field seats at each endzone, as well as the Redskins' recent downturn in the win column, paints the picture of a less-than-excited fan base.

(Photo via our own Daniel Shiferaw)