Malcolm Kelly, Sadness And The Types Of NFL Failure

It seems likely that Malcom Kelly's career with the Redskins is coming to an end. Which is sad, but in all the wrong ways.

Share All sharing options for: Malcolm Kelly, Sadness And The Types Of NFL Failure

Early in the month of August, I spoke to Malcolm Kelly about the nagging injury that's been limiting his chances in training camp. He sounded disappointed to have missed so much time, but optimistic about his chances to return.

He trailed off, not sure how to explain it, then tried again.

"The pain is just kind of weak now. Once I get that out there, get worked back up, you know, I'll be good."

Which sounds terrific. Problem is, we had that conversation in August of 2008.  Somehow, over the course of three full years, Kelly never ever managed to "be good."

Malcolm Kelly is probably going to be released some time soon. Maybe it'll be on August 30, when rosters drop from the lockout-bloated 90 down to a slightly-more-manageable 80. Maybe there'll be an injury settlement before then. Maybe he'll hang around until final cuts on September 3.

But wide receiver is a crowded position right now, with veterans like Santana Moss and Jabar Gaffney, late bloomers like Anthony Armstrong and young guys like Terence Austin, Leonard Hankerson, Brandon Banks and Niles Paul all vying for spots. Kelly fits into none of those categories, so he's unlikely to fit onto the roster.

That makes me sad, which is kind of inexplicable. 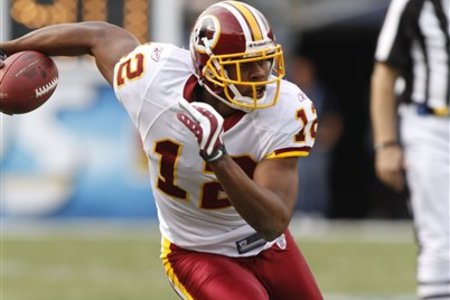 August of 2009 was a little better for Kelly. He was healthy after missing his rookie year, and would remain so for the entire season. In the second preseason game, there was even a brief glimmer of the possibility that he would wind up being a big-play receiver when then-head-coach Jim Zorn opened up the game with Jason Campbell targeting Kelly on a deep post route.

If this were someone else's story, the ball would've been where it needed to be. But it's Malcolm Kelly's story, so of course Campbell underthrew the ball and the pass fell incomplete.

"Woulda felt real good if we'd've completed it, y'know?" Kelly told me that in the parking lot of Redskins Park the next day, shaking his head with frustration through the entire conversation. "Long touchdown on the first play of the game, that would've really set the tone."

He paused for second, then added, "It was close." 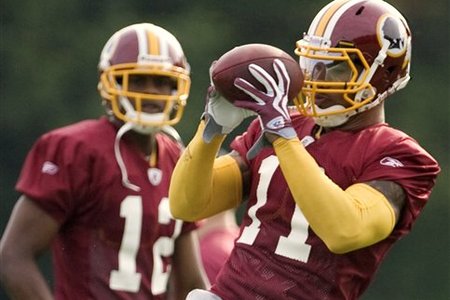 It's inexplicable that Kelly's eventual release would make me sad because -- as you've probably gathered by now -- it's an event that's seemed inevitable for some time now. Kelly should just be another draft bust, another college wide receiver who couldn't make it in his first stop in the NFL. It's a tough business, one where you come in knowing that one day you're going to get replaced. You certainly don't expect anyone to be sad about it. (Trust me on this.)

But Kelly's failure strikes me as unique. Here's the thing: there are dozens and dozens of interesting ways to wash out of the NFL. There are lots of exciting narratives that fit that otherwise depressing story. Kelly is experiencing none of them. Not only does he find himself (at least for the moment) having failed as a professional football player, he's even failing to be an interesting failure.

In 2010 Kelly travelled to Arizona to work out with then-quarterback Donovan McNabb. This seemed like the sort of feel-good camaraderie-building story that could only be a good thing. Instead, it was another Malcolm Kelly story: something too depressing and uninteresting to even be called a tragedy.

What started as a minor hamstring tweak in Arizona turned into a slightly sore hamstring during training camp, then got somewhat better ... and suddenly got much worse.

"The clock has been ticking," Kelly had said during that brief period of apparent health, and then time was up.

When head coach Mike Shanahan put Kelly on injured reserve, the similarities to an awkward break-up were barely even subtextual.

"I like the guy as a person," the coach said, because I love you but I'm not IN LOVE with you would've been really awkward.  "I think he's got a lot of qualities you look for in a football player. The main thing is, can he get out there on the football field eventually and play." 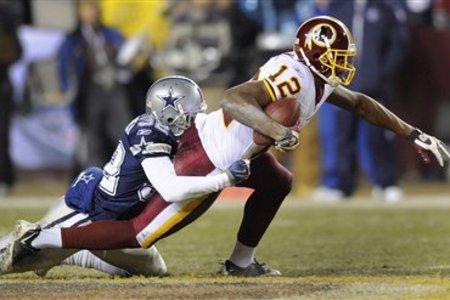 Malcolm Kelly's story, depressing though it is, is not any of the following:

Now, at the likely end of his Redskins career, Kelly winds up as neither a tremendous success nor a staggering, imploding supernova of  failure. Instead, as his likely finish approaches, he's just a nice guy who never got a break, an immense talent who never became anything more than a ball of potential.

And that middle ground is much sadder to me than either of the extremes. 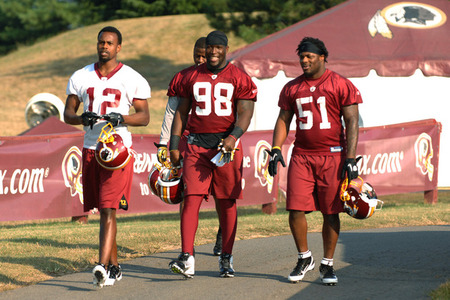 Just over a year ago, as the post-Arizona hamstring injury that would land him on I.R. lingered, Kelly let his optimistic facade slip. He declined to predict a return date, for example:

"I ain't gonna waste my time doin' that," he said. "I think I got to the point a few day ago where I stopped sayin' days."

He explained what the problem was, sort of:

But, most siginificantly, he offered what might as well be an epitaph for his career to date.

"I don't know if words can really explain how frustrating it is," he said, after another afternoon of sidework, away from the team and their real practice activities. "Especially when you come in with high expectations of yourself, and they got high expectations, it's just ... it's frustrating."

It seems likely that's going to be Malcolm Kelly's Redskins career in a nutshell: high expectations, and more frustration than words can explain. It's been more than a year since he made that assessment, and we're still waiting for the official end of his Redskins tenure. That's possibly the saddest part of all.