Since the start of Washington Redskins training camp a week ago much has been made of the sparse crowds headed to Ashburn to see their beloved Burgundy and Gold practice. Well, it appears Fan Appreciation Day has, at least for one Saturday in August, fixed that small crowd problem.

Via @Rich_Tandler comes this photo of fans surrounding the practice field, six to eight people deep in some instances, hoping to catch a glimpse of doughy Rex Grossman or enigma-wrapped-in-a-riddle John Beck. Reports of a half-mile long traffic back-up on the Loudon County Parkway leading into Redskins Park also indicate, at least for one day, Redskins fans are more than willing to come root on their hometown team. 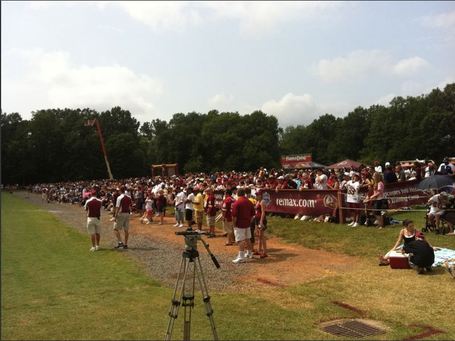 Now, let's see if this carries over to the rest of training camp. I suspect that apathy brought on by a decade of disappointment will bring back crowds 75 fans strong for the rest of the month, but at least we'll always have this special Fan Appreciation Day, right Mr. Snyder?