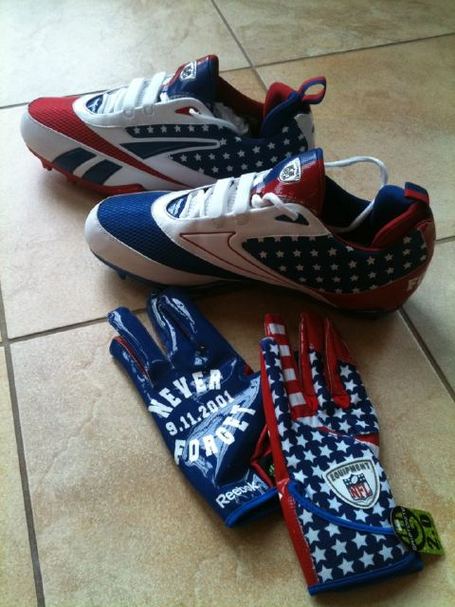 It's still not 100 percent clear whether Chris Cooley will play for the Washington Redskins against the New York Giants because of an injury, but if he does play, it appears that will be wearing those shoes and gloves. Reebok has been sending their clients special gear to commemorate the 10th anniversary of September 11, and that's what Cooley ended up getting.

The gloves have a special "never forget" message on them and are red, white and blue with the stars of the American flag. The shoes are of the same color, with the special Reebok logo in red, white and blue. It's part of a league-wide initiative that Reebok is doing with all of its clients. Here are the shoes they sent Julio Jones of the Atlanta Falcons.

And yes, the players can actually wear these, so long as they are from NFL-approved partners like Reebok.

(via Christy Cooley, as spotted on Hogs Haven).

Click the link for more on the Giants vs. Redskins NFL Week 1 matchup. Also, be sure to visit Hogs Haven, SB Nation New York and Big Blue View.