Kool-Aid Drinking: Ryan Kerrigan Should Be The NFL Defensive Rookie Of The Year

Share All sharing options for: Kool-Aid Drinking: Ryan Kerrigan Should Be The NFL Defensive Rookie Of The Year

With an incredible performance this week against the New York Giants, rookie linebacker Ryan Kerrigan is on track for 16 interceptions and 16 touchdowns. I haven't done the requisite amount of research at this point, but I'm pretty sure those would both be rookie records.

So is it too soon to nominate Kerrigan for Defensive Rookie Of The Year? (Yes, we know, we're being kool-aid drinkers. Just let us be).

The Washington Redskins beat the Giants 28-14 in Week 1, and Kerrigan's big play was a huge momentum swing and went a long way towards securing the victory. Kerrigan was a force throughout the game, making one tackle, assisting on four more tackles, and forcing pressure on Eli Manning often during the game.

Okay, no need to even play the rest of the season. Cancel the voting. Let's just give Kerrigan the Defensive Rookie Of The Year award right now. And when he accepts the award, he'll surely be making this face. 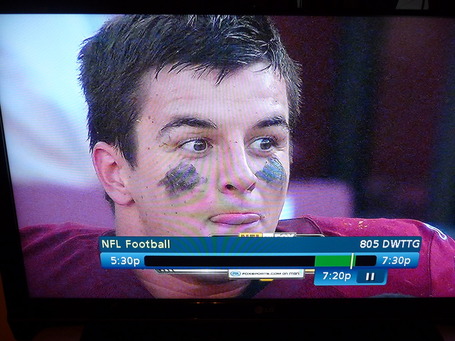