Share All sharing options for: Why Rex Grossman's Fourth-Down Touchdown To Santana Moss Was Really Gutsy

The tide of the Washington Redskins' 22-21 win over the Arizona Cardinals on Sunday changed when Rex Grossman found Santana Moss for an 18-yard touchdown on fourth and three to cut the Cardinals' lead to 22-21 with 5:17 left to go in the fourth quarter. If the Redskins don't convert that play, they are down eight with five minutes to go against a Cardinals offense that was moving the ball well.

So it was a huge play. It was also a play that showed that Grossman has massive cajones, which is something we knew already. As you see below, he ignored two wide open receivers underneath to go to the end zone.

The first wide open guy was running back Roy Helu out in the flat. There was a linebacker there, but Grossman had plenty of time to wait and gun in the pass for the first down, as you can see here. 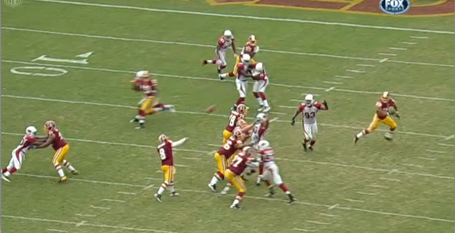 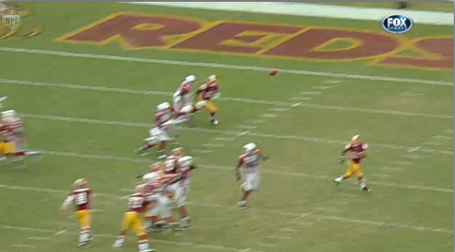 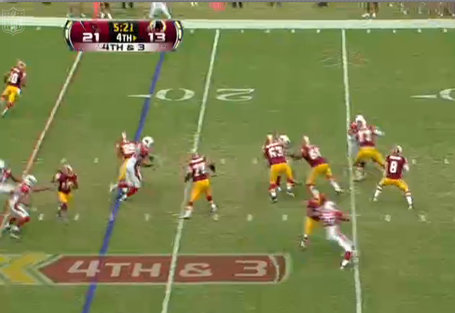 Instead, Grossman went for it all on Moss and the corner route, which ended up being the right call. After the game, Mike Shanahan said the following, via CSN Washington's Redskins Postgame Live:

"I think, looking at the defense, he knew what his first read was. He was going to go for the touchdown if it was there," Shanahan said.

It was there, and it was gutsy. It also saved the game.