Byron Westbrook secured the Redskins 2-0 start with a vicious hit on what proved to be the last Cardinal possession of the game. A photo of the fumble is below the jump, and a link to NFL.com video is here. Warning, NFL.com will make you sit through 30 seconds of the Geico Gecko before you get to see the clip.

As Cardinal receiver Chansi Stuckey catches the ball and turns up field, he makes a weak attempt at a juke move and holds the ball out from his body. Though a very slim window, Westbrook blasts Stuckey from behind, separating the ball from the receiver.  Veteran safety Reed Doughty jumps on the ball to recover the fumble, leading to the Redskins second win in two tries.

The play was originally ruled down by contact, but a review proved otherwise. Here's photographic evidence the review was correct. 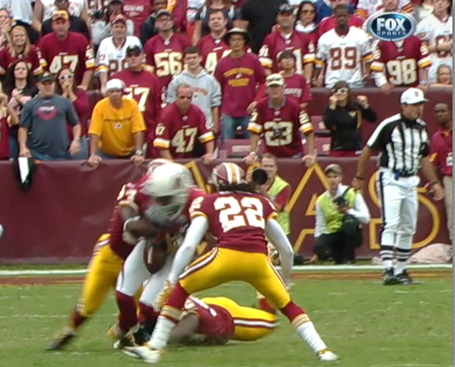 The fact that Westbrook and Doughty are the two names making the game clinching play shows how far down the depth chart the Redskin defense was forced to go. Injuries continue to ravage the defensive backfield. LaRon Landry missed another game, corners Josh Wilson and Kevin Barnes came off the field with injuries as did rookie safety DeJon Gomes.