D.C.-area rapper and huge Washington Redskins fan Wale was a guest on ESPN First Take with Skip Bayless this morning, and during the segment, the two "debated" whether the Washington Redskins are for real. I think you know how Wale feels about the Redskins, and you know Skip is not one to pass up a good debate, so you kind of know how this plays out. Nevertheless, here's a transcript. Video and funny Wale photos below the jump.

The best part is around the 3:30 mark, when Wale imitates reporters pretending that they believed in the Redskins all along once they succeed. Here's part of the rest.

He was asked whether the 2-0 start was a mirage and responded as follows.

"Listen, it's a system. When Baltimore won the Super Bowl, they didn't have the greatest quarterback in the world. They had a quarterback who believed in the system. You still need to score points. Trent Dilfer won games. We can win games."

"We're deep in the playoff team. 9-7. Listen, Michael Vick has a concussion, Michael Vick's not doing well. Come on now. [Tony] Romo has a punctured lung. Felix Jones is all hurt. The NFC East is all open right now. We got as good a chance as anyone else."

He then called the team "workaholics" as everyone laughed at him, which led him to imitate reporters. Funny stuff. Even funnier: some of the faces Wale was making, especially when he was imitating reporters. 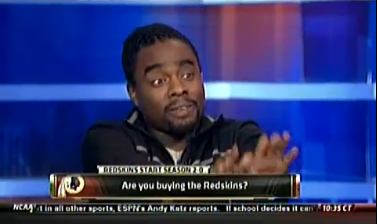 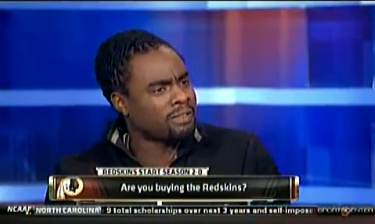 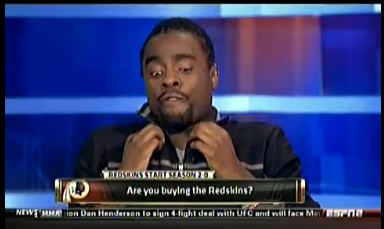 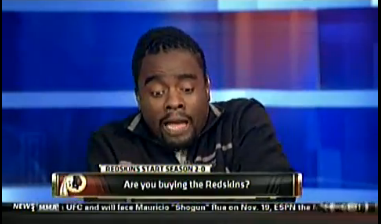