The Washington Redskins got a huge play just now against the Dallas Cowboys, as LaRon Landry forced Kevin Ogletree to fumble deep in his own territory. The ball was rolling around for a while and was eventually recovered by Josh WIlson. At the time, the call was Cowboys ball because the ruling on the field suggested Kevin Barnes touched it while out of bounds. The call was eventually overturned and the Redskins got the ball back.

But was it the right call? Photographic evidence says yes.

First things first: when Barnes was out of bounds, he wasn't touching the football. Here's photographic evidence from @cjzero. 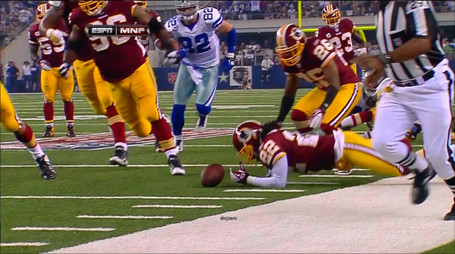 So Barnes is OK. The next question has to do with Wilson. It's close, but Wilson's foot is inbounds. Via @bubbaprog. 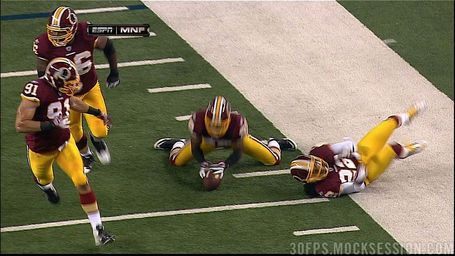 So in the end, the referees made the right call. Unfortunately, the Redskins settled for a field goal on the ensuing possession.