The Washington Redskins have several free agents to deal with this summer, but one that should get some attention is Adam Carriker, who had a career year on a much-improved defensive line. Based on this tweet, though, the Redskins may have trouble retaining him. 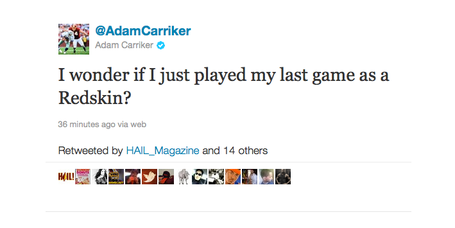 Carriker later told a fan "no idea" when he was asked if he was coming back.

Carriker had his strongest season as a pro, but as CSN Washington's Rich Tandler notes, the Redskins may not want to pay him the money he desires.

The issue, as is so often the case, may turn out to be money. Carriker will want to be paid as a starter. The Redskins may be reluctant to do so as they likely are planning on him being depth.

Jarvis Jenkins, the team's second-round pick last year, is waiting in the wings after being impressive before a season-ending knee injury.