Like many of you, I'm having trouble coming up with a reason why many people absolutely hate Penn State's decision to hire Bill O'Brien as its new head coach. I get feeling underwhelmed, but hate seems a bit strong. LaVar Arrington, a noted Penn State alum enthusiast, is one such person that's feeling very angry about the news.

With Arrington, though, it's at least coming from a slightly different place. Here's the Twitter rant he unleashed earlier: 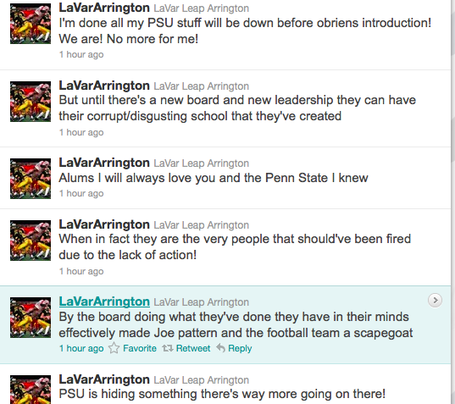 Obviously, you have to start from the bottom and work your way up. It seems like Arrington's major issue is not with O'Brien himself, but how the Penn State board was the one making the decision.

This comes off as a little silly -- the school has already suffered enough embarrassment -- but then again, we haven't lived Penn State like Arrington has. Who am I to tell him to not be betrayed?