Mike Shanahan has had an eventful two-year tenure with the Washington Redskins, and now, you can add being clowned on 'Saturday Night Live' to his list of landmarks. Outspoken TNT basketball analyst hosted the show on Saturday night, and one of his skits involved him advertising a "post-game translator app" to cut through the non-answers by coaches and athletes after games. One of the clips involved Shanahan giving the following quote:

"You know, when I had John Elway, my face never got this red." 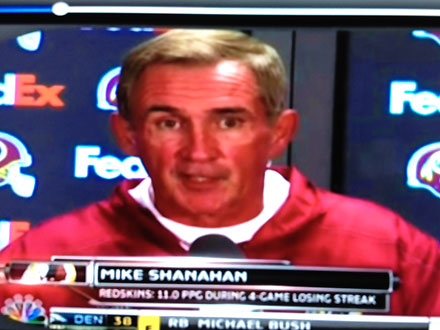 Yup, Barkley just made fun of Shanahan's striking sunburn. You might even call the insult a "sick burn." Yup, I just went there.

Other NFL coaches featured in the skit include Rex Ryan, Bill Belichick and Andy Reid. All of the jokes are quite funny. Well done, Chuck.