An athletic play by Washington Redskins linebacker Ryan Kerrigan has the team tied with the Atlanta Falcons at halftime.

The Washington Redskins are tied 7-7 with the undefeated Atlanta Falcons at halftime Sunday at FedEx Field, and they have one man to thank for the points on the board: Ryan Kerrigan.

The second-year linebacker from Purdue made an extremely athletic play five minutes into the second quarter, deflecting a Matt Ryan pass to himself and then sprinting 28 yards into the end zone for the only Washington touchdown of the day so far. The play, in all its glory:

And how does one celebrate such a play? Why, a FedEx Flop, of course. Thanks to @recordsANDradio for visual proof of the latest touchdown celebration sweeping Redskins Nation: 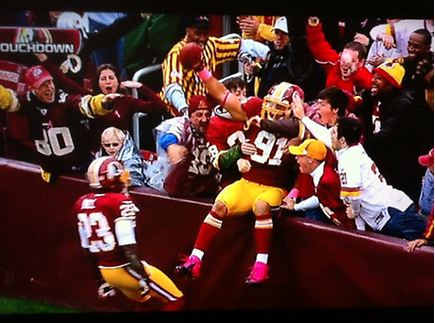 Offensively, Washington was led in the first half by Alfred Morris and the ground game. Morris had 86 yards on the ground in the first two quarters, and 20 yards through the air. According to CSN Washington, Morris is the first rookie running back to rush for 75 or more yards in each of his team's first five games since Eric Dickerson in 1983.