PHOTO: At Least 8 Other Teams Did What Redskins And Cowboys Did In 2010

Share All sharing options for: PHOTO: At Least 8 Other Teams Did What Redskins And Cowboys Did In 2010

Here's what we wrote about the ludicrous salary cap penalties handed down to the Redskins and Cowboys by the NFL (and, more accurately, it's owners) Monday afternoon.

These penalties came about not as a result of any rule-breaking on the part of the Redskins or Cowboys, but as the result of collusion between the other 30 teams and a rubber-stamp by the Commissioner and the NFLPA. (Remember, back in 2010, the NFL saw nothing wrong with the bonuses paid to Albert Haynesworth and DeAngelo Hall that are now apparently beyond the pale.)

Well, our friends over at Hogs Haven have unearthed a chart that should make Redskins and Cowboys fans even more furious. It's after the jump. 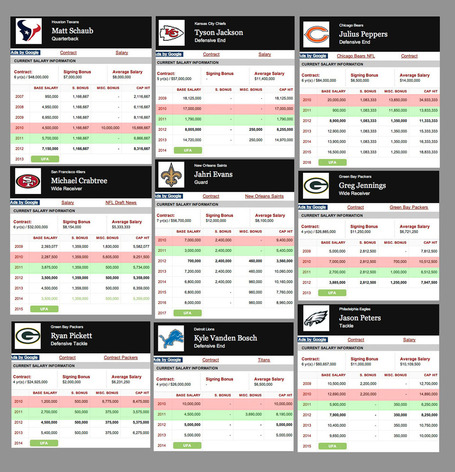 At least eight other teams did exactly the same thing that the Redskins and Cowboys did in 2010, all with the NFL's approval. None of them have received any penalties from the NFL, apparently because they're not owned by guys named Daniel Snyder and Jerry Jones.