We can't say we'd ever sat through a Pro Day exercise before, but if they were all as entertaining as Robert Griffin III's was today, we'd definitely be glued to the TV set.

The Heisman Trophy winner looked crisp and confident as he unofficially completed 75 of 81 passes to his various Baylor teammates who were running various uncovered routes.

Oh, and did we mention the soundtrack? Yes, while Griffin was going through his paces, music from Jay-Z, Kanye West, and Michael Jackson blared from the speakers.

RG3 on the pro day tunes: "We did script the soundtrack. I don't think you'll hear 'Thriller' at any other pro day."

"We had to throw some rap on there," Griffin said. "I'm an R&B guy, but I don't think guys would have liked it if Usher had come on."

Oh, and Griffin also went through his workouts in this shirt, which we fully expect to see at various D.C.-area stores very soon. 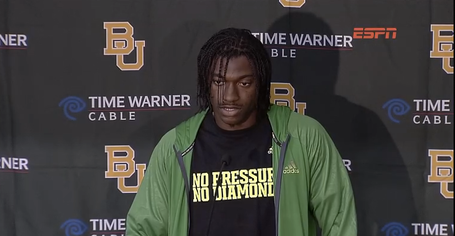