While most of the Washington media was on hand for Robert Griffin III's Pro Day Wednesday in Waco, Andrew Luck's Pro Day in Palo Alto hasn't received nearly as much media attention. That doesn't mean the Redskins aren't out in California doing their due diligence, nor does it mean that certain former Secretaries of State can't be a part of the fun.

Rachel Nichols of ESPN snapped the photo that you're about to see after the jump, which depicts Condoleezza Rice dropping by Stanford's facility to see what all the fuss is about.

Rice, who served first as National Security Adviser and then Secretary of State under George W. Bush, is a huge football fan and turned down an offer to serve as Commissioner of the (then) Pac-10 in favor of becoming a political science professor and senior fellow at the Hoover Institution at Stanford after her time in Washington. She's been spotted at several Stanford football games during the Luck era, and clearly maintains just as much interest in the NFL Draft process. 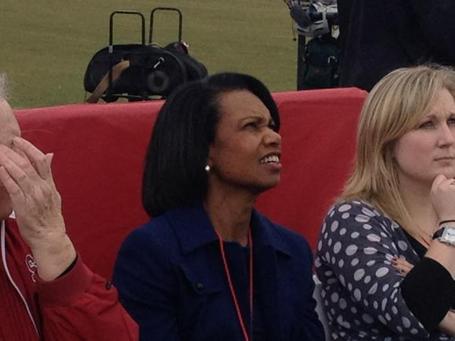