Despite not having been drafted yet, Robert Griffin III's appearance in Chantilly gave him a glimpse of how Redskins fans feel about him already.

Decked out in his custom-made Redskins jersey that read ‘Griffin' on the back, Luke and his father, John (who also had his custom made jersey), traveled from Ellicott City to a sports memorabilia show in Chantilly on Saturday to meet the man most fans believe will be the player that helps the Redskins return to relevance in 2012 and beyond.

Fortunately for Luke, he got more than he bargained for. Just before Griffin was to head out to begin his autograph session, the younger Donaldson was escorted into the back area where Griffin was located before making his appearance in front of the masses. Donaldson found his way to the man he came to see, looked up, and introduced himself to the 6-2, 220 pound quarterback out of Baylor. Griffin then bent over, shook his hand and greeted him with a smile before heading off to sign autographs. Luke got his wish.

The Donaldsons captured the feeling inside the Dulles Expo Center Saturday afternoon, as Redskins fans came out in droves to have items autographed by and photos taken with Griffin.

"The Redskins have had 20 years of challenging times," the elder Donaldson said. "So [Griffin] brings hope."

Hope. It's something the Redskins fanbase have been holding onto as the team's struggles have continued over the years. But after the team traded two future first-round draft picks and a 2012 second rounder to acquire Griffin's rights, that hope has now gave way to all-out excitement.

"When we first found out [about the trade], it was a similar feeling as when Joe Gibbs was going to come back [in 2004]," Donaldson said. "It was that kind of elation." 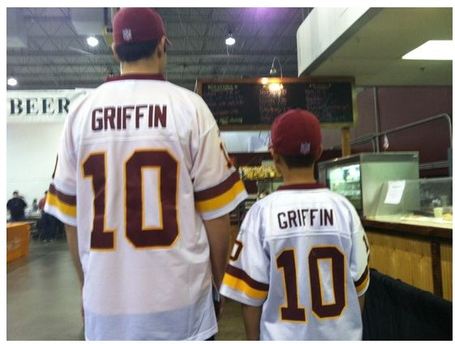 At an event that had current and former NFL players such as Miles Austin, Michael Vick, Julio Jones, Jerome Bettis and Derrick Brooks, it was Griffin - someone not even in the NFL yet -- who was the star of the show.

Indeed, despite not even having been drafted by a team, Griffin seems to have already achieved rock-star status among Redskins fans. Many who attended the show Saturday came dressed in all sorts of ‘RG3'-related paraphernalia. Whether it was custom jerseys, t-shirts with ‘RG3-2-DC' superimposed on the front, Griffin's now-famous ‘Superman' socks, the Redskins faithful had their first chance to show their adoration for the reigning Heisman winner face-to-face.

Griffin spent nearly four hours -- two hours longer than he was scheduled for -- taking photos with fans and signing items, the vast majority of which were Baylor and Redskins-related. Fans spent a minimum of $100 for the right to have his signature on their items. He did his autograph sessions alongside some of his (presumed) future teammates in running backs Roy Helu, Evan Royster and linebackers Lorenzo Alexander and Rob Jackson. 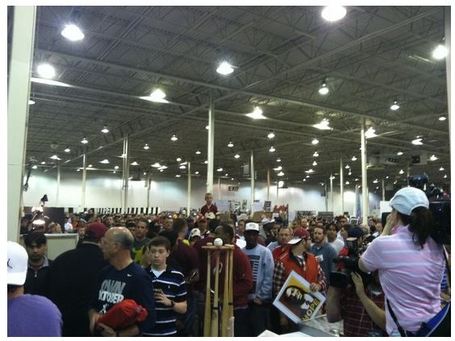 While he interacted plenty with fans at his table during his signing session, Griffin's representatives did not allow him not to speak to the media. He was escorted out of the Expo Center surrounded by his handlers and he was quickly taken into an SUV that drove back to Dulles Airport.

Regardless, if Saturday was any indication, the Redskins may have a legitimate star on their hands, and one that will certainly be expected to lead the organization back to the promised land. No one knows if Griffin will be able to meet the lofty expectations that will be laid upon him, but even if he comes close, it's quite possible that Saturday's event could be a preview of a decade-long love affair between D.C. and Griffin.

That is, of course, assuming the Redskins are able to draft him, a thought fans wanted Griffin to envision while he was at the event.

As Griffin was leaving after his signing session, a fan yelled at him: "We can't wait for you to come back to D.C.!"

Griffin reacted with a big smile as he walked away.