Via 106.7 The Fan's Grant Paulsen on Twitter, this is your presumptive Redskins quarterback of the future behind the counter at a New York City Subway. 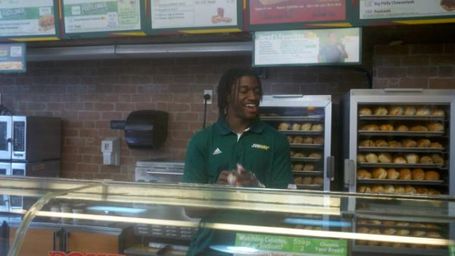 As Griffin told Dan Steinberg, this bizarre tableau stems from the fact that the popular sandwich chain proclaimed the Heisman Trophy winner to be a "Famous Fan."

They labeled me as a Famous Fan, but I went there religiously in college, because I needed a quick meal before practice. It was always there to help me gain the weight that I needed, and to last me through practice. It's pretty cool, kind of an honor to be part of the family.

Apparently being a famous fan also gets you a statue of your likeness made entirely of sandwich ingredients. We're not going to lie, the statue is a little disturbing, but we also have no doubt it's delicious. Plus, the hair made out of peppers is a very nice touch.