Share All sharing options for: PHOTO: The Redskins Practice Bubble Is Fully Inflated

We had to see it ourselves to believe it, and luckily, the obliging media members who attended Mike Shanahan's pre-draft conference Wednesday were able to provide the pictures.

Via Lindsay Murphy of FOX 5, we give you the bubble. 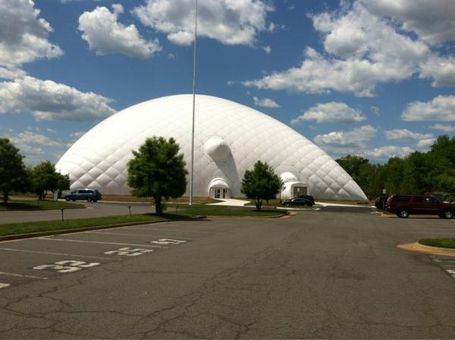 We'll let you all make whatever Stay-Puft marshmallow jokes you wish to make at this time.

In all seriousness, this is a massive step forward for the franchise. As amusing as it was to read reports of the team being forced to work out at local health clubs due to the nasty late-fall/early winter weather in Ashburn, the fact of the matter is that it made the Redskins franchise look like a Mickey Mouse operation, letting crucial game preperations suffer because it was either unable or unwilling to scrape together the money to build one of these.

Thankfully, it's now been built, and we can only hope the Redskins start making up for lost time.