It's always fun when Washington D.C.'s sports teams support each other. In a city where so many residents come from other places, it makes us natives feel good when the athletes who all come from all over the place show some civic pride. So we're damn happy to point out that D.C. United's Dwayne De Rosario recorded this video shortly after Robert Griffin III was officially selected by the Washington Redskins in the 2012 NFL Draft.

The club has put together a special hashtag for the occasion: #MVPtoMVP. We can only hope that proves to be prophetic going forward.

By the way: we really hope that D.C. United actually puts this Robert Griffin III jersey on sale. I'd buy it. 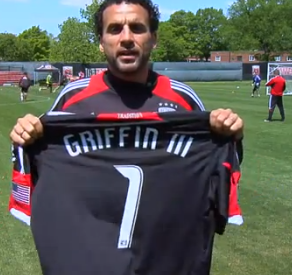