PHOTO: The Only Robert Griffin III Painting You'll Ever Need

Share All sharing options for: PHOTO: The Only Robert Griffin III Painting You'll Ever Need

We're not great fans of sports-related paintings, as a rule. Sports are one of those things for which the "there's no substitute for being there" rule applies, and photography is really the only medium that comes close to capturing the immediacy of a specific event.

Paintings, on the other hand, wind up being either modified portraits (with an out-of-focus crowd featured prominently in the background), vivid (bordering on garish) sub-expressionist LeRoy Neiman paintings.

But this painting of Robert Griffin III, depicting him as a Godzilla-like figure with miniature Dallas Cowboys in his clutches, is indescribably different, and, we'll be honest, kind of cool.

Via @black_1 and Burgundy Blog. 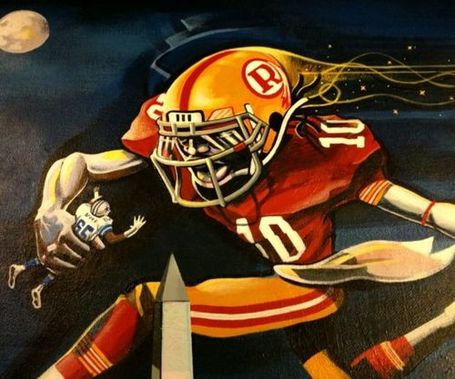 We know, we know, it looks so incredibly over the top. But that's part of the appeal of it. And not to get too "NYU art history major" here, but we think we see a very real resemblance to the Primitivist stylings of Henri Rosseau. We don't know much about art, but we know what we like. And we like this a lot.