Yi Jianlian Could Be The Wizards' Diamond In The Rough

Since trading for him in July, the Washington Wizards have gone out of their way to make Yi Jianlian feel comfortable for the first time in his NBA career. The result could be a breakout season.

Share All sharing options for: Yi Jianlian Could Be The Wizards' Diamond In The Rough

Luckily, Yi's owner is Ted Leonsis, a man who owns and is passionate about both the Wizards and the Washington Capitals. So when Yi told Leonsis he's never been to a hockey game, Leonsis knew exactly what he had to do.

Yi spent the entire time in Leonsis' owner's box on Monday, taking it what proved to be a thrilling Capitals-Senators game. Some snapshots make it seem like he wasn't interested, but in reality, he was overwhelmed by the moment.

"It was a great game," he says. "It made me feel more at home. It's more interesting in Washington D.C., because you have more than basketball."

Leonsis' move is just the latest example of the Wizards doing everything they can to make Yi feel comfortable in D.C. Since coming into the league as the sixth pick of the 2007 NBA Draft, Yi has been a disappointment, with three non-descript seasons in Milwaukee and New Jersey. The Wizards, though, feel he lacked confidence and comfort in his previous two stops, which prevented him from reaching his potential. Since trading for him in July, they've made sure to provide that for him.

It's early, but thus far, Yi has rewarded the team's faith in him. After a strong showing at the FIBA World Championships, Yi has been impressive during the Wizards' 3-1 start in preseason, showing outstanding defensive awareness and a newfound desire to mix it up on the glass. Coach Flip Saunders says he's been one of the team's glue guys.

"He's done just about all the little things you'd hope a guy would be able to do," Saunders says. "Sometimes, in a lineup, you have to have a guy that does those things." 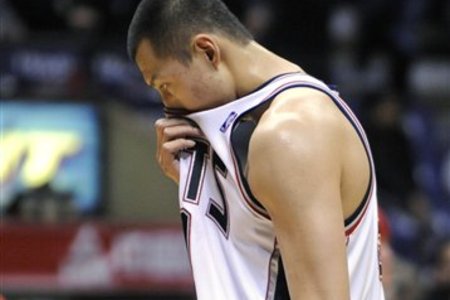 Yi's road to the NBA has certainly been a bumpy journey. Back in 2007, his handlers made a lot of noise about how he wanted his client to be in a city with a large Chinese market. When he was ultimately drafted by the Milwaukee Bucks, his handlers were upset, vowing to do everything they could to get him out of Milwaukee. At the time, Yi was seen as a diva, a guy too good to deal with the normal NBA Draft process.

In retrospect, the concerns Yi's handlers raised may have been legitimate. After Milwaukee refused to trade him, Yi stuck it out and struggled during his rookie year. The Bucks insisted on playing him at small forward, which didn't take advantage of Yi's skills, and he naturally struggled. The Bucks ultimately gave up on him after just one year, sending him to the New Jersey Nets in a trade for Richard Jefferson.

But somehow, Yi's Nets tenure was worse. More than anyone else on the roster, Yi was affected by the negativity that poisoned the team during last year's 12-win season. The team had no leadership and no direction, two things Yi desperately needed. Players were counting down the days until their next job, and nobody was there to properly coach him. Naturally, Yi's game morphed into 20-foot jumpers and uninspired defensive play.

"You think about the whole team in New Jersey, how many players stayed on that team?" Yi said. "They changed everything."

Yi won't go so far to say that he didn't like the atmosphere there, simply saying that it's "different" in D.C. But there are clear signs that it was toxic. David Thorpe, an NBA trainer who worked with Yi for six weeks over the summer, said this about his client.

"He's almost been like a stray dog ... no one's really hugged him to say ‘you're mine'," he said to Kyle Weidie of Truth About It in July.

And then there's this admission that Yi gave later in our interview last night.

"I think this is the best team for me because I really feel good about my teammates over here. We all play together, stay together. We have a lot of young guys that stay together and just have fun, go on the court and play hard," he says. 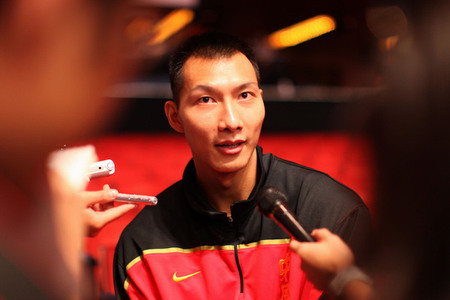 All this said, Yi knew he could not use his environment as an excuse for his underwhelming play. Yi's statistics last season -- 12 points and seven rebounds per game -- do not look bad on the surface, but they mask just how poorly he played last year. Yi was unable to be an efficient scorer, due to his propensity to shooting 20-footers, and contributed poorly on the glass for someone his size. He was also a mess on defense. According to Synergy Sports, Yi ranked just 280th in the entire NBA at defending all plays, ranking 239th in defending spot-up shot attempts, 213th in isolation situations and 239th in defending post-ups.

So this summer, Yi set out to become a much more complete player. The first step was contacting Thorpe, a renown NBA trainer who has worked with players like Kevin Martin, Luol Deng and Udonis Haslem in the past. Thorpe worked with Yi for five weeks starting in June, emphasizing rebounding and sprinting the floor. Thorpe told Weidie he was "blown away" by Yi's athleticism, so the goal was making sure he started to actually use it.

After that, Yi spent a lot of time working with Bob Donewald, the coach of the Chinese national team. Donewald's emphasized the need to be confident and aggressive, and Yi showed that in a breakout FIBA World Championships performance. Despite having little talent around him, Yi averaged 20.2 points and 10.2 rebounds in China's six games. The latter was the best among all players in the tournament.

All this made it so Yi was ready to show off his newfound skills with the Wizards. Thus far, he's done exactly that. He's mixing it up more inside, and while he still lacks strength at times, he's demonstrated more tenacity that he ever did anywhere else. Rebounding tends to be something that's hard to improve, but Saunders believes Yi may buck the trend.

"When he came into this league, they played him predominantly at the [small forward position], all on the perimeter. Sometimes, you don't rebound because, with the position you play, you can't get to rebounds," Saunders says. "We're trying to see if he can play more inside for us. He's a lot bigger than I thought he was going to be height-wise, and he's a lot stronger in the lower body than people might think."

The biggest surprise, however, has been Yi's defense. With JaVale McGee struggling, Yi has emerged as the team's top defensive player in preseason, displaying the kind of athleticism that allows him to hedge on pick and rolls and quickly recover to his man. Saunders calls him "our best pick and roll defender," which is shocking considering his defensive struggles early in his career.

"He's got very good intelligence, playing off the ball defensively. He's been our best pick and roll defenders, jumping out on screens," Saunders says. 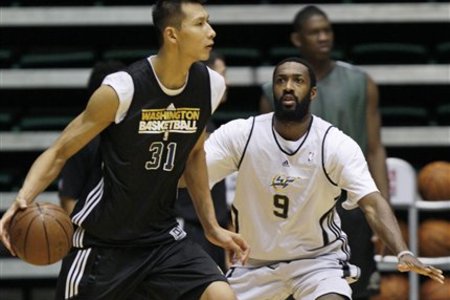 Perhaps the issue is that Yi just needed confidence and good coaching. He had neither in his previous two NBA stops, and when you combine that with his difficult adjustment period to American culture, it's easy to see why he struggled. Luckily, he comes to D.C. with smaller expectations and less pressure. The Nets paid the Wizards $3 million in cash to cover his salary as part of the July trade, and he can become a restricted free agent after the year is up.

Yi wears the scars of his previous NBA stops on his face. He shrugs when asked whether he wishes he had been a part of a more nurturing environment earlier in his career ("Milwaukee is cold. Nobody wants to go out," he says when asked if anyone took him under his wing like Leonsis did on Monday), because it's water under the bridge now. There's nothing he can do to undo the first three years of his career.

But like most of the team, he's energized for his fresh start. He loves living in Washington D.C. ("It's a very international city, and it's great," he says), and he seemingly loves the way people are supporting him here. It's only fitting that he's looking forward like the rest of the organization.

"Things happen," he says. "You just have to think about the things you can control."