The Washington Wizards' Preseason By The Numbers

Preseason wasn't a collection of meaningless exhibition games for this year's Wizards. Find out what the numbers have to say about John Wall and the rest of the Wizards as we look forward to the upcoming season.

Share All sharing options for: The Washington Wizards' Preseason By The Numbers

I know, I know. The preseason is meaningless. Players aren't going all-out, they're playing in non-NBA venues and they're doing everything they can to avoid being injured. Bla bla bla.

That said, there's still a lot that can be learned about this year's Washington Wizards team from what we've seen so far. With so many new pieces in place, everyone is competing for playing time and trying to show they belong. So while the final score might not have any significance, the individual numbers from the key Wizards on this squad will go a long way in telling us what we can expect this season, especially from the team's new franchise player. 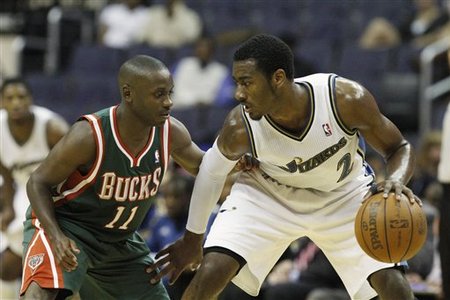 7.9: The number of assists per game John Wall doled out during the preseason, which led the NBA. But don't hand him the assist title this season just yet, because he also led the NBA in another category this preseason ...

35.4: The average minutes per game Wall played, a full minute higher than anyone else in the NBA during the preseason. Playing those extended minutes will help him adjust to the NBA faster, but let's not crown him the NBA's best assist-man just yet. On a per 48 minute basis, Wall dropped down to 7th in NBA during the preseason, which is still pretty good. If he keeps that up throughout the regular season, Wizards fans have every right to be estatic.

16.0/8.7: Average points per game and rebounds per game for DeMarcus Cousins during the preseason. Just in case you thought Wall was going to have a cake walk to that Rookie of the Year award this season.

17.3/12.0: Average points per game and rebounds per game for Blake Griffin during the preseason. You may want to see how things play out for a little while before printing up any "John Wall = Rookie of the Year" shirts.

3.9: Turnovers per game for Wall during the preseason, the second highest average in the NBA, only behind Stephen Curry. This is one of the areas Wall will struggle this season. It's a problem that will get better with experience, but it will be the cause of quite a few headaches this season.

7.7%: Wall's three point percentage. Keep in mind, that's based on a 13 shot sample size. Anyone can go through a slump where they miss 12 of 13 shots from behind the arc, especially when it's their first 13 shots in the league, so I wouldn't worry too much about that average staying that low for the rest of the season. That said, if you think he'll rebound to be a 40 percent shooter from beyond the arc this season, you're going to be disappointed. Wall's outside shot will be a long-term project for this team. 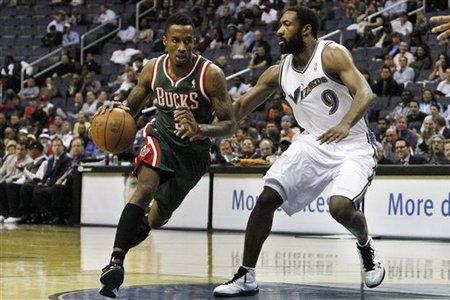 46.7%: Gilbert Arenas' three point percentage during the preseason. In the same way Wall's percentages should improve over the course of the season, Arenas' will likely won't stay this high over the course of the season. Still, for a guy who's connected on 35.7 percent of his shots over his career, Arenas' early returns are encouraging. With Wall taking over the primary ballhandling duties, Arenas doesn't have to create his own shooting opportunities anymore. Simply being able to spot up and fire away will make him a far more efficient threat from beyond the arc this season.

6: The number of assists Adam Morrison compiled in 77 minutes.

3: The number of assists Nick Young compiled in 150 minutes of preseason action. That's an assist every 50 minutes, or two minutes longer than a regulation NBA game.

1: The number of assists JaVale McGee had in 143 minutes this preseason. He and Wall are going to have quite a give-and-take relationship. I'll let you figure out who will be doing all the giving.

7.5: Minutes per game Kevin Seraphin received in the four games he played during the preseason. Clearly, he's not going to be playing much in the regular season this year. If he isn't a prime candidate to get some seasoning and experience in the D-League this season, I'm not sure who is.

2.8: Fouls per game Seraphin averaged in just 7.5 minutes per game during the preseason. If you stretch that out over 48 minutes, Seraphin would average 17.92 fouls per game. That would leave only .08 fouls short of averaging three foul-outs per game. Like I said, this might be someone who should learn the ropes in the D-League for a little bit.

25%: Trevor Booker's field goal percentage during the preseason. It might take some time for Booker to find his way offensively, but his rebounding numbers are encouraging. In just under 15 minutes of action per game, Booker snagged 4.8 rebounds per game. If he can keep cleaning the glass at that rate, he'll be able to carve out a spot in the rotation this season, even if his shooting percentages stay low.

3.6: Average number of assists and rebounds from Kirk Hinrich during the preseason. If Hinrich can somehow manage to finish the regular season with the same number of assists and rebounds this season, I firmly believe he should be honored with some sort of a plaque. Such a feat would certainly have to put him on a rare list, if it didn't make him the pioneer of such a statistical anomaly. 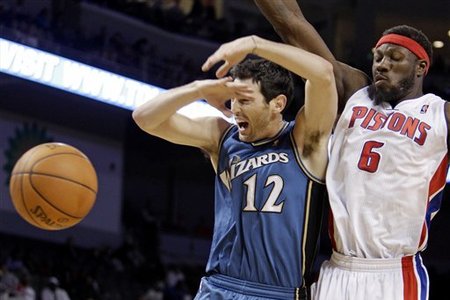