Share All sharing options for: John Wall Is Rendered In Proper Heroic Fashion

ESPN the Magazine just released a great feature this year in which it has teamed with Marvel Comics to do season previews for each NBA team by portraying them in classic Marvel covers. Some teams, such as the Miami Heat obviously received a bit more thought to their portrayal than others, as the Celtics are portrayed as the Fantastic "Five," and the Milwaukee Bucks stars Brandon Jennings and Andrew Bogut are redone as Power Man and Iron Fist. Others, such as the Detroit Pistons and Indiana Pacers are less obvious at first glance which belies their boring nature. And Dwight Howard as Wolverine? Wolverine is 5'6"!

See all the Marvel covers here. Apologies, you must be an ESPN Insider.

The Wizards also receive the cover treatment and as expected John Wall receives the honors. Wall is portrayed as the Human Torch (a member of the Fantastic Four) who will "reduce opponents to toast." 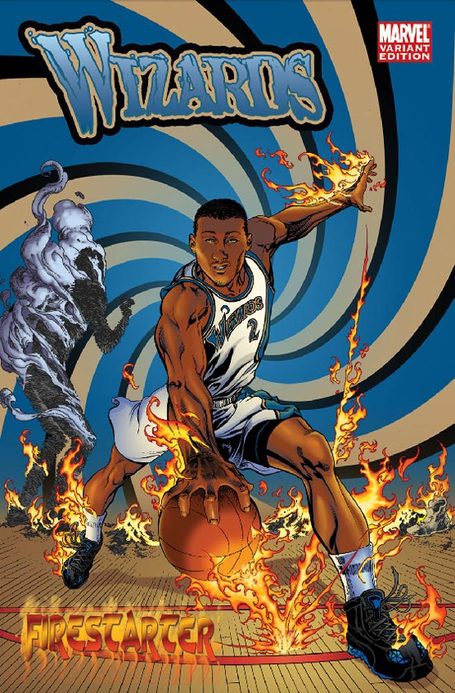 Now I can accept the Human Torch. But Marvel has an entire catalog of super fast people on its roster than would better represent Wall. What about Quicksilver? The guy is the fastest thing on the planet, a former member of the Avengers and the X-Men and is generally awesome. Only problem is that he is kinda evil. But in that scenario, maybe Gilbert Arenas could play the Scarlet Witch, whose Hex Power makes everything mysteriously go wrong.