Morning Commute: Why Don't You Just Relax For A Second, Juwan Howard

Share All sharing options for: Morning Commute: Why Don't You Just Relax For A Second, Juwan Howard

Let me start off by saying that I do not condone what Hilton Armstrong did to Joel Anthony in the Wizards' game against the Heat last night. In case you missed it, you can check it out here, and here is a photo tweeted by our very own Mike Prada. 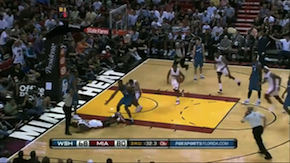 That just isn't a smart basketball play, and it will get you thrown out of the game every time.

In fact, I heard Tim Legler on Sportscenter this morning compare it to a helmet to helmet hit in the NFL; not sure I'd go that far but I understand what he is trying to say. This is among the most dangerous plays that can happen on a basketball court.

Elton Brand got the boot when he did it the other night to the Wizards, so I am totally fine with Hilton getting tossed as well. In fact I'm expecting him to get suspended for a game too. My big problem is with what Juwan Howard did after the play.

After the foul, Hilton clearly runs over to Joel to lend him a hand in helping him up. This is the international sign of, "my bad" on a basketball court. Things are happening very quickly out there, and sometimes mistakes are made. But when you extend your hand to help a guy up that shows that you can recognize it.

What Juwan Howard did after the play, running over and shoving Hilton Armstrong as he stood over his teammate, just seems like false hustle to me. He'll be lauded by Heat fans as a "great teammate," when he shoved a guy who was trying to help his teammate up. I'm sure he was upset at the foul, but once Hilton goes to extend his arm, it should be over.

Obviously I've never played in the NBA, but I've played a fair amount of basketball in my day. Hard fouls happen, but as soon as some sportsmanship is shown, it's over. Juwan Howard does not need to intervene to show his allegiance to his team. It just seems fake to me.

Today on SB Nation D.C.: Adam Vingan on the state of the NHL's Southeast's Division.