The Wizards' 2010-11 season begins tomorrow, as a midnight practice will kick off training camp. Here are five big questions that must be answered in the coming days.

The Washington Wizards kick off training camp on Monday, holding and NCAAesque Midnight Madness session before diving into the work at hand. This year's Wizards have a much different feel to them then the team that embarked on the 2009-10 campaign. At this time last year, both fans and pundits were predicting the team would contend in the Eastern Conference, following the return of Gilbert Arenas, the trade that brought Mike Miller and Randy Foye to to the team and the signing of Fabricio Oberto to provide veteran depth.

Unfortunately, things did not go as planned for the organization. Last year marked possibly the bleakest year in franchise history, following numerous injuries, lackadaisical play and the fining and suspension of Arenas. Ultimately, the team was blown up at the trade deadline, with two of the Wizards "Big 3" being sent out for a combination of draft picks, players and cap space.

But a funny thing happened between Arenas' suspension and the start of the new season: the Wizards actually had some luck. The Wizards got the first overall pick for the second time in team history, giving them the right to draft John Wall, the consensus top player in the draft. They also swung another trade, using their cap space to acquire veteran guard Kirk Hinrich and the rights to Kevin Seraphin from the Bulls.

The Wizards enter training camp as a team that has had a massive face lift. Of the players from the the halcyon days of the "Big 3" era, only power forward Andray Blatche and Arenas remain. The Wizards are now the youngest team in the league, with an exciting core of players and the salary cap flexibility to continue to build the team. With its acquisitions, the franchises believes that this season will mark the start of a new era and a possible end to the purported "Curse of Lez Boulez."

Thus, the 2011 season can be seen as one that is filled with great hope for the Wizards, but also just as many questions. As training camp kicks off, here are five questions that Wizards fans hope will be resolved prior to the start of the new season. 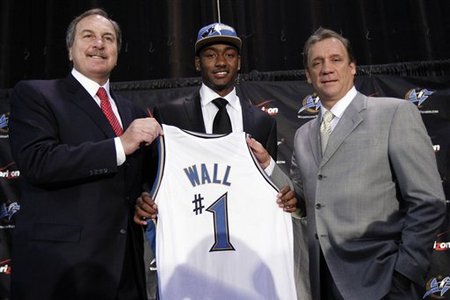 Leadership has always plagued the Wizards as a franchise. Antawn Jamison and Caron Butler were captains of the team prior to being shipped out, but they were always "lead by example" players that believed that their actions on the court would inspire teammates. This caused some disconnect on the team, as throughout the "Big 3" era there was tension between the old guard of players who believed in quiet professionalism and young players like Blatche and Nick Young who were criticized for their game preparation and gregarious natures. Arenas fell between the two camps, fostering his image as the Clown Prince of Basketball. Unfortunately, while Arenas was clearly the star attraction of the team, he was often unwilling or unable to take on a vocal leadership role and make the team his own.

Enter John Wall. In Summer League play, Wall demonstrated not only his basketball skills, but a leadership ability that the Wizards have been lacking for years. As the point guard, he acted as court general, directing players to their proper positions, encouraging and rewarding good play and expressing displeasure at sloppy basketball and missed assignments. Wall demonstrated that he has the ability to lead the team, not only next year, but also for the next 10.

However, Wall's Summer League performance saw him lead a group of NBA youngsters and fringe players. Now, he enters a situation where he is not only taking over the image of a franchise from its former star, but also having to lead teammates with a longer track record of success. It will be interesting to see the dynamic between Wall and Arenas, as well as that with other veteran players such as Hinrich. Will Wall immediately grabs the reins of the team, or will he defer to the veteran players as he acclimates to the NBA game? 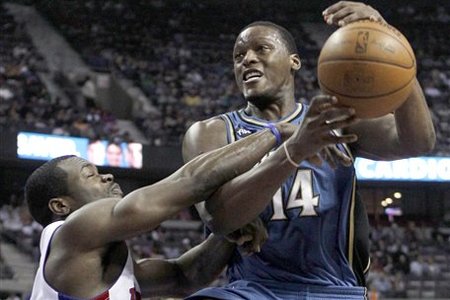 No. 2: Who Makes The Biggest Claim On the Small Forward Position?

Every year the Wizards seem to open training camp with at least one starting position up for grabs. In years past, it was the endless battle between Etan Thomas and Brendan Haywood to see who would start at center. Last year, their was an open competition for the shooting guard position, with Mike Miller, Randy Foye, Young and Deshawn Stevenson all in the mix.

This year is no different for the Wizards, as the small forward position is now wide open following the departure of Caron Butler to the Mavericks at midseason last year. The perceived incumbent is Josh Howard, who was resigned this year on a one year contract after tearing his ACL just four games into his Wizards career. Howard, however, is out until at least the end of November recovering from his injury, leaving the starting role as a likely battle between Al Thornton, Young, rookie Trevor Booker and possibly Kirk Hinrich or Yi Jianlian.

Thornton finished last year as the starting small forward for the Wizards, though many question his qualifications as an NBA starter. While a member of the Clippers, Thornton's performance indicates he plays better when he has an idea of his role and his minutes on the team. An excellent one-on-one defender, he also has the reputation as something of a shot jacker, which is something that he will not be able to get away with as Arenas and Wall are integrated into the team.

Booker showed flashes of his defensive ability and toughness in summer league, and will it be interesting to see whether coach Flip Saunders prefers the defensive mentality of Booker. Young and Hinrich are longshots to start at the position, as they would be moving away from their natural guard roles, but Young at least had the height and athleticism to be considered for spot starts at the position.

Ultimately, whoever starts at small forward at the beginning of the season is most likely keeping the seat warm for Howard's return. The player most likely to grab the starting role is the one quickest to grasp Saunders' system and implement it in game situations. 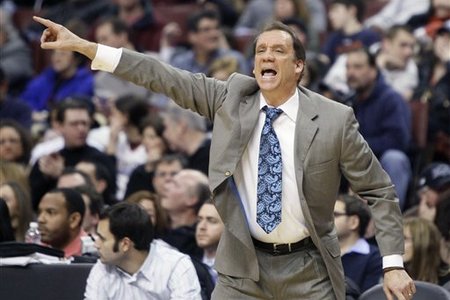 Question No. 3 - Which Flip Saunders System Will Be Implemented?

When Saunders took over as coach last year, he brought with him a offensive system that was a variation of Hubie Brown's Hawk offense. The main difference between the past Wizards' offense is that Saunders system rigidly puts the ball in the hands of the point guard at all times as the initiator of the offense. While not a complete disaster, the system was only grasped by a few players, such as Mike Miller and Brendan Haywood, and appeared to curtail the abilities of Butler in particular. It also was a tough adjustment for Arenas, who had always been used by former coach Eddie Jordan as a "guard" in his Princeton offense rather than the traditional point guard role that Saunders' system demanded. Though Arenas' assists went up, he never truly looked comfortable in the offense and was unable to emulate Chauncey Billups' success in Saunders system.

However, following the trade deadline, Saunders jettisoned the Hawk and implemented a two-guard offense which placed more emphasis on post play. The move was made to maximize Blatche, the most talented player on the team at the time, and it helped him have a breakout performance following the dismantling of the team. Saunders also said the change was made in preparation for the return of Arenas as an acknowledgement that his talents are more as a scorer than a playmaker.

The arrival of John Wall, however, make things more complicated. Saunders has gone on record saying that pure point guards are "delivered from heaven," and Wall may be a better Chauncy Billups than even Billups himself. By sliding over to the shooting guard role, Arenas will have to worry less about playmaking and can concentrate on what he does best, which is score. However, a return to the Hawk could limit Blatche, a player upon whom the Wizards hope to build their foundation. Look for Saunders to continue to develop his two guard offense, but place all offensive initiation in the hands of Wall, who will spend most of his first year learning to run an NBA offense. 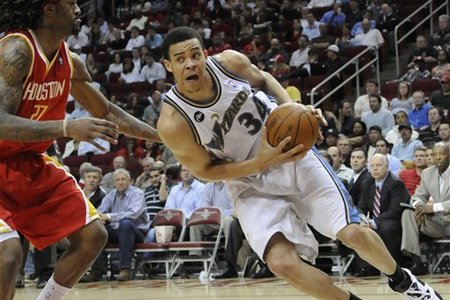 Question No. 4 - Which Young Big Man Will Develop Quickest?

The Wizards spent their summer stockpiling young big men, perhaps in the hopes that one will break out next season. Following the acquisition of Booker, Seraphin and second-round pick Hamady N'Diaye at the draft, the Wizards made a trade with the New Jersey Nets to acquire power forward Yi Jianlian. These players, along with center JaVale McGee, Blatche and journeyman center Hilton Armstrong will combine to form a frontcourt that could charitably be called extremely green.

The focus of training camp will be on McGee, who had an offensively impressive Summer League performance, but is still prone to defensive lapses and poor decision-making. This year is sink or swim for McGee, because the only players backing him up are Armstrong and N'Diaye, who may not even sign with team. McGee will have to grow up in a hurry this year and learn that, as impressive as foul line dunks are, proper boxing out is what truly make the fans love you. Hopefully McGee's low ranking in NBA 2K11 will inspire him to greater heights, because without a breakout performance from the young big, the Wizards will find themselves on the losing end of a lot of 120-113 games. 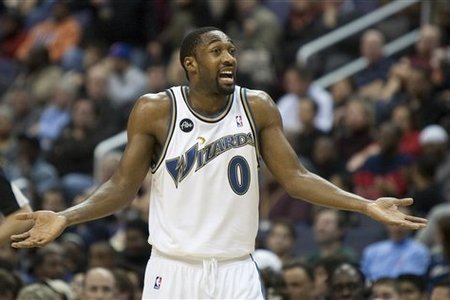 Question No. 5 - Which Gilbert Arenas Arrives At Training Camp?

Arenas has been in the news for so long that people have forgotten that he hasn't actually spoken in public since his sentencing for bringing guns into the Wizards' locker room. Last year, Arenas vacilated between refusing to talk to the media at all and then returning to his quirky outspoken ways. Word is that Arenas has looked great in the offseason and is already working with John Wall and other players in developing a rapport.

So which Gilbert will we get?

My expectation is that we are going to see a very different Gilbert Arenas from what we have come to expect. Arenas has been roasted in the media, both locally and nationally, and has had his organization rip down his banner and stop selling merchandise with his name on it. Further, insiders keep suggesting that the Wizards are desperate to dump Arenas for five cents on the dollar. Traditionally, Arenas has used this type of criticism to fuel his play to new heights, and take out his frustration on the competition. I expect no different this year, bu doubt that Arenas will continue to make proclamations on who is on his hit list. I expect Arenas to be more cagey and less open in his answers, and I think that the Wizards PR team will always be at his side to ensure that nothing "controversial" is said.

Even with Wall around, Gilbert Arenas is the key to the Wizards season. His behavior and play during training camp and the regular season will do much to determine the course of the franchise. My expect that Arenas will do what he has done his entire career and prove his doubters wrong. Look for a determined and committed Arenas to arrive at training camp, one whose "mental checklist" is much more detailed that Lebron James'. Arenas represents the dysfunctional, yet productive past of the franchise, and training camp is a chance for him to prove that he is also part of the organization's future.