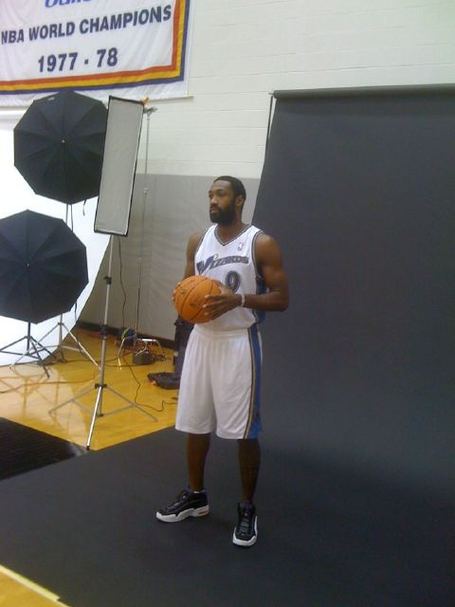 WASHINGTON, D.C. - During his NBA career, Gilbert Arenas has been known for his energy, his emotion and his big, wide smile. Today, at Wizards media day, none of those characteristics were on display.

In his first public appearance since being charged for bringing guns into the Wizards locker room, Arenas was subdued, to say the least. Sporting a grizzly beard, Arenas did not smile once during the entire media session. He spoke for just over three minutes before he walked away, along with a Wizards PR official. Choosing his words carefully, Arenas mostly mumbled, taking advantage of David Stern's suggestion to not bring up much about the past.

Here's a transcript of his session.

What excites you most about this team going forward this season, given some of the additions that were made.

It's my profession, and there's a lot of excitement going on with the team, so I just want to get this season started.

What does this feel like for you, talking again, the media, the whole deal?

It feels different, I take it?

How have you changed as a person since you were last with the team?

"I'm more to myself now.  I'm getting older, so you automatically grow.  Just another year. New team."

When you were taking your photos, your smile was not there. You kept a very business-like face on. Is that part of the message you're trying to portray?

Are you in a good place? Are you happy? Given what you've been through, a lot of people would be psyched to be past that, where you are right now? You don't look like you're happy. Are you?

"Yeah, I'm very happy. In the past, I would show happiness on the outside. There's no need to do that anymore. Now, I just need to play the game the right way, play with my passion. That's what we need to focus on.

How do you plan to win back the fans of this franchise?

(pauses). All I can do is just go out there and play hard.

Do you think the fans ever left you?

"Fans just want to see good basketball. It don't matter what you do. Your game speaks for itself. That's all I think about right now."

How would you characterize your relationship with the club?

It's a great relationship. It's a business. "Any product you own, if something happens to it, you gotta do what you gotta do to save your company, so I understand it, so I'm going to move forward.