John Wall And Gilbert Arenas Already Have A Secret Handshake

Share All sharing options for: John Wall And Gilbert Arenas Already Have A Secret Handshake

Well, I guess it's not really a secret because it's been popping up all over the internet today, but the Wizards already have a super-cool, bff-level handshake, and it's only the first day of training camp.

You can find video of the exchange as part of Mike's Midnight Madness feature, but in the meantime here are some pictures he posted on Bullets Forever. 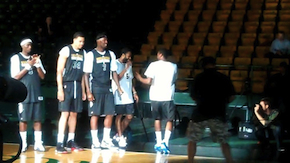 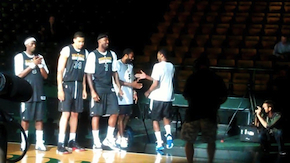 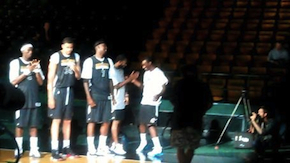 More on what the handshake consists of after the jump.

Dan Steinberg got to the bottom of the handshake, and found out it isn't just Wall and Arenas who play patty cake like this, the handshake is something shared by the whole team.

Except then Wall tapped Andray Blatche on the shoulder and did the same handshake with him. And a bit later, there were Blatche and Nick Young, doing the exact same routine.

So, what's the deal?

"That's my signature, but I'm not going to take credit for it," Young later told me. "We all do it. It's Respect. Every year, I come up with something, and that's our handshake."

Well that's kind of a bummer, I was really hoping that it was something exclusive to the team's two biggest stars. On the other hand, team unity, even in if it's just in the form of dap, is never a bad thing.

Steinberg also breaks down exactly what the handshake consists of.

The move consists of two quick hand slaps, followed by that crouching boxing-type stance, which probably has some pop culture significance that escapes me. As they do the third step, the participants shout out "Respect!" with a touch of playful irony. As you might imagine, it's very hard to do that with a straight face, which is probably why Gilbert couldn't help but drop his stone face during the handshake, and why Wall was laughing when NBA TV replayed the handshake during his post-game interview.

I don't really like that the way they use the term "respect" can be described as playfully ironic, but I don't think that means they don't mean it when they say it. No matter how you slice it, it's good to see the team sharing something and bonding right from the get-go.