Was Wizards Media Day The Start Of A Newer, Quieter Gilbert Arenas?

Gilbert Arenas says he's only going to show his happiness on the court. Does this mean the quirky Gilbert Arenas is gone for good? Not exactly.

Share All sharing options for: Was Wizards Media Day The Start Of A Newer, Quieter Gilbert Arenas?

It wouldn't be Wizards Media Day if Gilbert Arenas wasn't making headlines for something. Last year, he caught people's attention when he said he was going to be more serious. In 2008, he drew the ire of the media and the NBA when he skipped out on media day festivities. The year before that, he grabbed attention by introducing the world to Gazo The Pranksta. And then there was 2006, when he became an internet celebrity by announcing he had converted his house to Colorado altitude.

This year, he flipped the script, grabbing attention by not doing anything to grab attention. Everyone has their own opinions about why Arenas appears to be more somber this season, when he'll bring back to being the zany, goofy  personality we're familiar with and how he's going to fit in on a revamped roster designed to fit around John Wall.

Those questions won't be answered for weeks, if not months, but Arenas did answer several questions during Media Day. 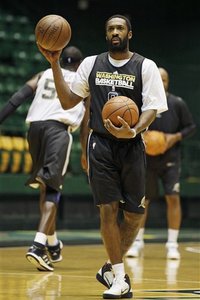 Is this all an act?

In a way, yes, but not really. Arenas is the kind of guy who knows how to live at one extreme or the other, but has no use for living in the middle. So when David Stern told Gilbert Arenas to avoid talking about the gun incident, there were only two possible outcomes:

Once things quiet down and the focus returns to what's happening on the court, Arenas will naturally open back up. That process will speed itself up if he starts the season slow. Whenever Arenas goes through a slump, he always reverts back to having fun to break the slump.

How long is he going to grow that bead?

Probably forever. Michael Lee of the Washington Post reports he's growing the beard as part of a content with Nick Young to see if he can grow his beard longer than Young can grow his afro.

Unfortunately, what neither one realizes at the moment is there's no reason for either one to stop growing their hair anytime soon. Once Young realizes an afro helps his marketability (it's impossible to hate a man with an afro) he's going to make sure he keeps that hair on his head as long as possible. Conversely, Gilbert Arenas is one of the most stubborn, competitive people you'll ever come across. Looking like the fourth member of ZZ Top would rank pretty low on the things he's done to win something.

Plus, Young's logic on why he'll defeat Gilbert is flawed. Here's what he said about the bet on media day:

I don't think he's going to get used to walking around looking like that. [People] might not want to talk to somebody with that beard.

Arenas doesn't want to talk to people anyway. If anything, an unkempt beard will allow him to avoid people more than ever. 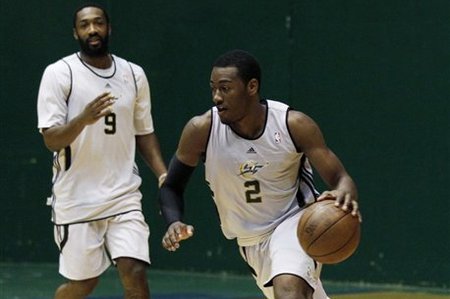 He said "The only place I want to smile is on the court." He's not being serious, is he?

Even if there wasn't compelling photographic evidence to the contrary, there's about a million different places Gilbert Arenas would enjoy smiling off the court, including:

Of course he is. Did you see that beard?

By mid-season, the Gilbert Arenas we've come to know will be back. Perhaps the events of the past year will take some of that edge off of him, but he can't change who he is. At his core, he's still the same fun-loving guy he's always been. Vague answers to reporter's questions and a wannabe version of Joaquin Phoenix's beard don't change that. If anything, they re-enforce that he's the same Gilbert he always has been, and always will be. 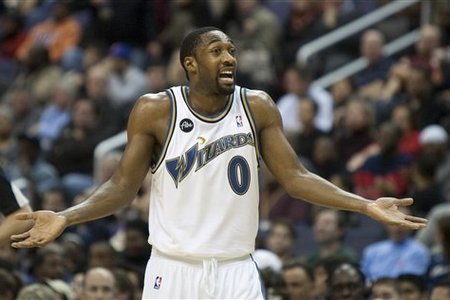