John Wall Is Still Injured, And It's Affecting His Performance

John Wall is playing, but he admitted after the Wizards' game on Saturday that he's not fully healthy. How is his injury affecting him? Should he sit down? We talk to the Wizards' guard and try to find some answers.

Share All sharing options for: John Wall Is Still Injured, And It's Affecting His Performance

WASHINGTON, D.C. - The floor was spread, and notorious sieve Jose Calderon was the defender. John Wall held the ball at the top of the key, his team holding a two-point lead against the Toronto Raptors with 30 seconds left in the game. These were the moments where number one picks show their skill, using their superior quickness and athleticism to leave defenders in the dust when it matters most.

It hadn't been a particularly good game for Wall to that point. He had taken 13 shots, and made only four. Three of the missed shots were layups, while the other eight were jumpers outside of 10 feet. Meanwhile, Calderon became the latest point guard to light Wall up on the other end, as he had 19 points, 15 assists and nine rebounds to that point. It was such a thorough domination that Wall was taken out of the game on the ensuing defensive possession, to the surprise of the entire press table.

Wall started to move forward, and Calderon began retreating. The obvious move would be a quick cut either way, leaving the backpedaling Calderon in the dust, but Wall couldn't get the kind of explosion his first step normally provides, forcing him to rise up for a jump shot. He got almost no elevation, giving Calderon the chance to put a hand right in his face.

The shot caromed off the side of the rim, predictably. The Wizards got the rebound and ended up winning the game, but the sequence displayed the true problem with John Wall right now. Forget the rookie lumps, the confidence struggles and the horrendous supporting cast he's being forced to carry. The real problem with Wall is one thing and one thing only: he's not healthy. If he was, he would have been able to push off on his foot and get to the basket.

"It's just kind of tough for me because of the injuries," Wall admitted to me after the game. "That's the only thing really I think that's stopped me from being who I want to be and controlling myself." 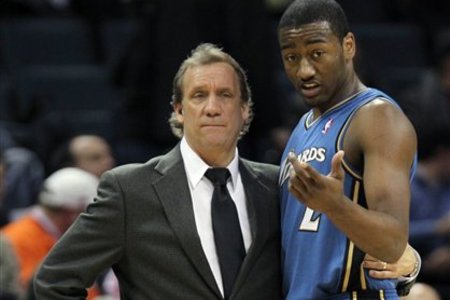 The Wizards hoped a little rest would solve Wall's injury woes, but that hasn't been the case. He sat out five games in mid-December with left knee and foot pain, but admittedly returned before he was 100-percent healthy. Since then, Wall's typical speedy dashes to the rim have been less frequent, and he's lacked much confidence in his jump shot. The foot and knee haven't gotten much better, and Wall also sustained a thumb injury after slamming into Marreese Speights in a game against Philadelphia a couple weeks ago.

"I got all this padding on my left hand, so it's kind of tough to grip the ball when I'm coming up to shoot it," Wall admitted. "But I'm working on it everyday. It's just being confident and holding my follow through."

Teams know this, and Wall undeniably knows this. But to make matters worse, Wall isn't making quick, decisive plays when teams give him space. In the Wizards' loss to the Timberwolves on Thursday night, Minnesota elected to drop their point guard well beneath the ball, pretty much daring Wall to beat them from the outside. Wall ended up missing all five of his jump shots from outside of 16 feet.

Flip Saunders noticed this too, and offered this analysis of his point guard before the Wizards' game against Toronto on Saturday.

"I think what happens is that he's been somewhat surprised about how far back teams are playing off him," Saunders said. "So he comes off really tentatively instead of coming off aggressive. If it's there, you go ahead and shoot it."

When presented with that critique after the game, Wall didn't seem to be completely on the same page as his coach.

"I know teams are going under, I make it at times, and at the same time, I can still be aggressive and get to the paint.  But if I see it's clogged up, I don't want to force it for no reason.  I can find my teammates a shot," he said. 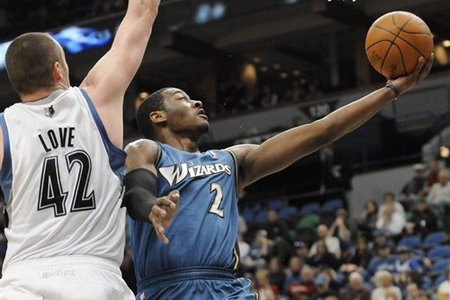 Despite the injuries, Wall has little interest right now in sitting out. When the idea even was implied to him on Saturday, he was firm that it wasn't really an option.

"I don't want to blame it all on having an injury in my knee that's still sore, and my hands. I never want to complain about nothing. If I'm out there playing, I'm playing," he said.

But the injuries are clearly affecting him in another area: defense. Wall was billed as a potential shut-down defender, but recently, he has been a liability. In the eight games since Wall has re-entered the starting lineup, the Wizards have faced Darren Collison (twice), Chris Paul, Jrue Holiday, Devin Harris, D.J. Augustin, Beno Udrih, Luke Ridnour and Calderon. Other than Paul, that's not a murderers row of point guard matchups.

The average production of those players during this span? Eighteen points, 8.5 assists and 58-percent shooting. Take away Harris' four-point, three-assist, 1-7 shooting performance, and the average rises to 20 points and 9.2 assists on 62-percent shooting. That's not all on Wall, but it still reflects badly on him.

Here, Wall didn't cite his injuries. Instead, he pointed to the way the NBA is different from college.

"It's tough, because a lot of teams run a lot of pick and roll, and guys can shoot it better than guys in college," he told me. "You're not going to have too many guys in college coming off screens shooting NBA threes or pull-ups. They're trying to get to the basket. NBA point guards are more explosive, and they know how to pick and choose."

Wall is certainly trying on defense. He told me he watches a 5-10 minute video clip of every guard he's about to play, and he's dilligent about doing that before every game. He's also hardly the only rookie to struggle on defense as a rookie --  Derrick Rose, Kevin Durant, LeBron James, Deron Williams, Brandon Roy, Carmelo Anthony and even Blake Griffin are among those whose teams have allowed fewer points per 100 possessions with them off the floor than with them on it.

But Wall is certainly capable of being better than he's been. While trying to guard Calderon, Wall was unable to crouch and get into a good defensive stance. He was too upright on several possessions, allowing Calderon to get him off-balanced with several fakes. If he was fully healthy, he would be able to slide his feet more effectively. 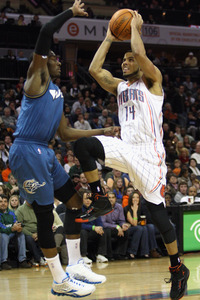 The tricky thing here is that Wall is still very effective even while playing through pain. He's averaging 15 points and nine assists per game, and as Saunders pointed out before the Raptors game, only three other players have averaged that many assists as a rookie. In a year for player development, the Wizards need Wall to be fast-tracked so he can assume the mantle of a young team.

"We're asking a lot of John," Saunders said. "If you really look at his progress, you gotta look back and look at other point guards. Where was Chauncey Billups his rookie year, and what did he turn out to be? Where was Rajon Rondo? He played 24 minutes, and look where he's at right now."

So ultimately, player and coach will probably elect to figure it out and hope Wall can overcome those injuries. Both seem optimistic that they will do just that. Saunders proclaimed that Wall's final 43 (now 42) games are going to be "very good," and Wall said he's going to do his best to get through the season.

"I think I'm still playing with the type of energy [that I need] for the whole season," Wall said to me. "Yeah, it's going to be tough. We'll see how it goes for the rest of the season."

As part of this process, Wall told me he's been seeking second-year guard Brandon Jennings out "from time to time" to help him get through the inevitable ups and downs of being a rookie. Wall has tried to heed Jennings' advice, especially after Jennings had so many peaks and valleys as a rookie. But one thing that Jennings has said publicly is that Wall needs to pace himself, because it's a long season.

Now that injuries are taking their toll on Wall, maybe it's time for him to truly pace himself and get right physically before he continues the grind. 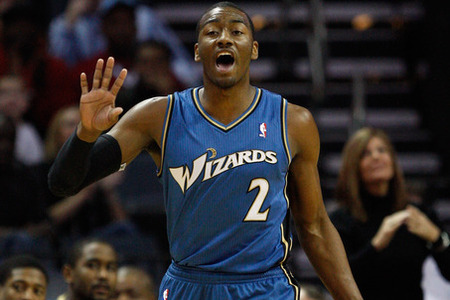