Share All sharing options for: How John Wall Stacks Up In The Year Of The Point Guard

There are so many good lead guards in the NBA this year that the guys over at SB Nation.com are ready label this as the year of the point guard. And they made a little chart to show which PG's are playing the best basketball. Let's see where John Wall stacks up. (Don't squint, it's bad for your eyes. Click to enlarge) 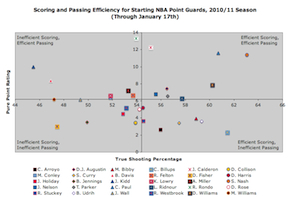 The horizontal access measures a players shooting efficiency, while the vertical measures his passing efficiency. As you can see, Wall ranks toward the back of the pack (which is to be expected from a rookie), and right around the middle in passing (which is pretty good for a first year player). I expect both of these numbers to climb as he gets healthy and the season goes on.