Andray Blatche continues to be inconsistent, both in performance and effort, and yet the Wizards still seem content to give him his guaranteed minutes and defend him in the press. It's time for the team to hold him more accountable.

Share All sharing options for: The Washington Wizards Also Deserve Blame For The Andray Blatche Situation

WASHINGTON D.C. - Given the way Flip Saunders was talking about Andray Blatche, it almost didn't sound like he was talking about the same Andray Blatche fans have seen all season. The Wizards' head coach was holding court with reporters before Tuesday's game against the Denver Nuggets, answering questions about Blatche's horrendous 2-10 game the night before against the New York Knicks. The theme was clear: he had a bad game, and great, developing players have bad games.

"I hate to say it, but John [Wall] has had [bad games] too, and we still play John," Saunders said, to defend his decision to play Blatche down the stretch. "Sometimes, in order to develop, you have to fail. What you hope is that they become fewer and far between. John has done that."

"Maybe we are giving [Blatche] a lot of responsibility, but there's also been games where he's come through in the end. It's a fine line," Saunders continued. "It's the Michael Jordan line - how many times has he failed compared to how many times he's had success taking the last shot."

As for that prickly little "lack of effort" issue that Blatche shot back against earlier in the day on the radio, Saunders pretty much poo-pooed the notion.

"You can take everybody - Andray, John, [Trevor] Booker, JaVale [McGee] - sometimes, when your performance isn't at the level you want it to be, it sucks the energy out of you," he said. "I think he's giving everything he is. Is he disappointed at times with how he plays? Yeah, because he wants to do good."

Finally, Saunders mirrored his player's criticism of the criticism directed at him, essentially passing some blame on the fans.

"Those same people that might get down on him, those were the same people cheering him in the Boston win [on Saturday]. That's how everyone is. That's why they're fans."

The whole situation sounded like a coach trying to find explanations for his superstar big man. And therein lies the problem.

Blatche has not been anything close to that level all season, yet the Wizards keep talking and acting like he is an essential part to their present and future. They defend him in the press, put him on billboards and continue to give him his guaranteed 35 minutes a game, instead of treating him like ... Andray Blatche, the talented but inconsistent big man who can be an X-factor, but never a reliable, every-game core piece. Given that type of soft treatment, is there any surprise that Blatche doesn't actually change? 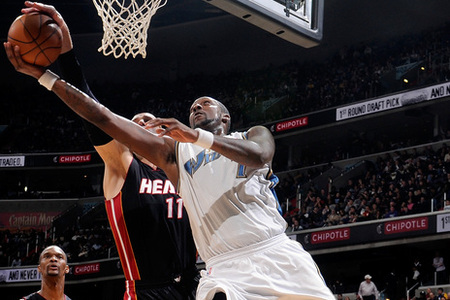 Alas, he is not, and he probably lacks the mentality to get there. Whether Blatche's responses to his critics in his two radio appearances this month are correct or not, he comes across as someone feeling sorry for himself both times. That's not unlike mercurial former superstar GIlbert Arenas, but there's a difference, as one Bullets Forever commenter put it.

At the same time, this doesn't mean Blatche is totally useless. He is a pretty good jump-shooter for his size when his feet are set, and he is quicker than many power forwards. When he's right, he has an excellent shot fake and drive move that many bigs can't handle. He can play in the high and low post, and contrary to what many think, he does make a concerted effort to get to the basket.

(I also don't buy that he doesn't try during games -- his bigger issue is what happens between games and how well he maintains himself then).

He just isn't capable of doing those things all the time, just like many talented players in this league. Many fans express frustration because they expect him to be more, and because Ernie Grunfeld handed him a five-year contract extension he may not have "earned." But the truth is that even Blatche's new salary is not the kind that franchise players are given. Here are six players who signed free-agent contracts in the range of Blatche's five-year, $35 million extension this summer.

Matthews is an emerging young player, but otherwise, that's a list of castoffs and bench players. The theory behind Grunfeld's decision to sign Blatche was certainly wrong, but in practice, Blatche is still receive what is currently an average NBA salary (though the lockout will surely change things). In other words, the Wizards are paying a talented, but inconsistent player the kind of salary talented, inconsistent players tend to receive. Many fans fail to recognize that and adjust their expectations accordingly, which is understandable, but somewhat unfair. 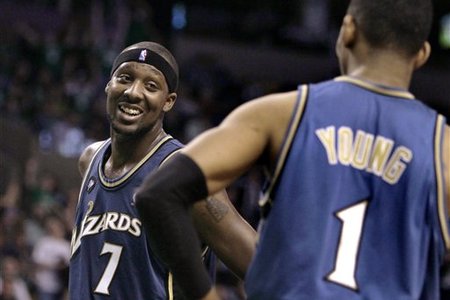 However, this begs the question we asked at the top: why treat him like anything more than what he's being paid to be? A good organization would do what it could to put that kind of player in a position where he can help the team while coming down hard on him when he doesn't. A bad organization beats the player down too much, or worse, lets him run rampant without so much an attempt to coach him, reign in his bad tendencies or bench him when he isn't bringing it. Right now, that's what the Wizards are doing. Saunders' comments are just the latest example.
As noted earlier, you can pretty much pencil Blatche in for 35 minutes or so a game, plenty of shot attempts, plenty of isolations in the post and almost no penalty for poor effort on a given possession. In fact, if you look at Blatche's game logs, he only has played less than 30 minutes in seven of the 38 games he's played this season. Those seven games:
We're basically looking at three games where Blatche played less than 30 minutes with the game still in the balance, one of which was the Knicks game. He's launched at least 10 shots in every game but two, and he's constantly getting his touches. Why, exactly, should Blatche change if his minutes, shots and money are fully guaranteed no matter what? What's the incentive?
Saunders probably feels that a player as inconsistent as Blatche needs consistent minutes, even suggesting that he needed to fail against the Knicks to learn how to succeed. But that's the kind of attitude you attach to a young player, like, for example, Blatche's frontcourt partner JaVale McGee, to whom Saunders gives unusually quick hooks. It's not the treatment you give to a guy who is on his third contract (even though he is still not old for an NBA player at 25). It also doesn't help when you talk about him like this:
"Just like with John [Wall], he's a main guy. He's our low-box scorer. At some point, in the fourth quarter, the games that we've won ... you're going to have to get something inside," Saunders said.
You just called Blatche a "main guy," Flip. Given what we know about Blatche's disposition, do you really think he sees any reason to truly push himself to the next level on and off the court if you make it clear that is how you see him?
After the talk, Blatche went out and scored 23 points, in what statistically looked like an outstanding game. As usual, it was a bit of a mirage. Fifteen of those points came in the first quarter, many on broken plays, and he couldn't maintain that going forward. He also lost Harrington constantly, allowing the Nuggets forward to spring free for three-pointers, including a couple daggers in the 120-109 loss. Essentially, it was a typical Blatche game: flashes of brilliance, inconsistency as a whole, helpful in some areas, not helpful in others. He didn't play badly, but he didn't play great either.
Saunders' response to Blatche's game after it was over:
"I was proud of how [Blatche] came back," he said. "As I said to our whole team before the game, that's partly what the NBA is about. When you have a poor performance, as an individual or a team, you always have an opportunity to come back and try to play well and make up for how you played."
"Proud?" It's as if Blatche was the 20-year old rookie No. 1 pick, not the six-year veteran that has teased a third coach now with flashes of brilliance.
I know this is a development year, but Blatche is getting paid like a veteran now, and he's at the age where he can no longer be considered "young." It's time to take the training wheels off and treat him like a real pro. That entails this novel idea: sitting him down when he isn't performing. You can still play him, and you can still start him, but there has be some accountability too for bad performance.
If he's not bringing it, Blatche should just not be on the court. That's a better alternative than calling his play "terrible," then turning around and giving him 38 minutes in the next game. Blatche has issues that may not be fixable, but it doesn't help when the Wizards keep letting his poor performances go unchecked.