Honestly, I'd Be More Surprised If Nick Young Didn't Have Bright Pink High-Tops

Share All sharing options for: Honestly, I'd Be More Surprised If Nick Young Didn't Have Bright Pink High-Tops

So I was watching this MTV Cribs-esque interview that NBC 4 just did with Nick Young, and one thing caught my eye. Amongst the dozens of pairs of shoes he showed, that apparently only represent half of his collection mind you, were these gems. 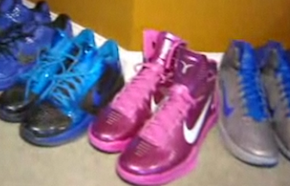 The best part of this is that Young described this portion of his collection as the shoes he wears to games and around. Meaning he has thee shoes for their functionality. When are we going to see these in action?