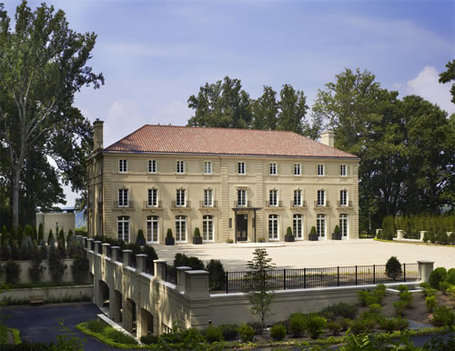 Normally, I don't really care much about subjects like the house of a certain D.C. sports athlete or personality, since it doesn't really have much to do with actual sports. However, in this case, Ted Leonsis made blogging about it fair game when he himself announced that he has moved into the house shown above. I guess he wanted to preempt those sneaky gossip bloggers.

Anyway, as Leonsis writes, the house has been occupied by Franklin Roosevelt, Joseph Kennedy and Al Gore, which puts Leonsis in interesting company. It's 13 acres right on the Potomac River, and it was just renovated and restored by the previous owner. It features an underground garage that can hold 10 cars, a tennis court, a pool house, three floors that are over 4,500 square feet, a full renovated basement and a 100-yard by 100-yard courtyard. That'll give Leonsis plenty of room to host his players whenever they feel like coming over.