The Wizards have announced that they will be unveiling a new display that features a re-furbished edition of the Bullets' 1978 championship trophy when the Wizards host the Nets on Friday. Here's a pic, courtesy of the team's Facebook page. 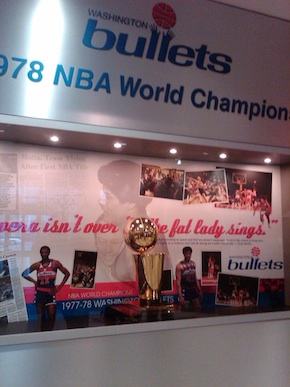 Usually, when you hear the term "Trophy Case" plurality is part of the equation. As in, "a case featuring multiple trophies." But when your the Wizards and you have just the one championship, it's really more a case for a trophy. Still looks pretty good though.