Share All sharing options for: JaVale McGee Dunks While Biting A Piece Of Paper In The Net 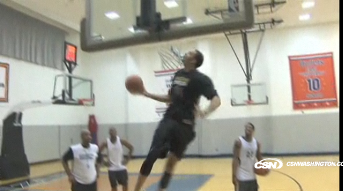 If JaVale McGee wants to somehow beat Blake Griffin in the 2011 NBA Slam Dunk contest, he's going to have to do something crazy. After all, Griffin is a 1/2 favorite to win the event, according to the latest Bodog odds.

This dunk, though, may qualify as something crazy. That's McGee putting a piece of paper in the net and biting it as he dunks the ball. It comes from a post-practice session documented by CSN Washington (via DC Sports Bog), and it just might be one of the more creative dunks you'll see. If JaVale is thinking about bringing this one out during the actual contest, I have one piece of advice: do it, JaVale.

(Additional screenshots below the jump. You can watch the whole video here) 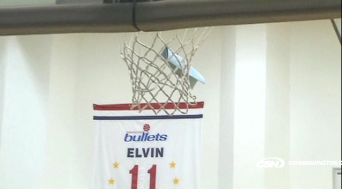 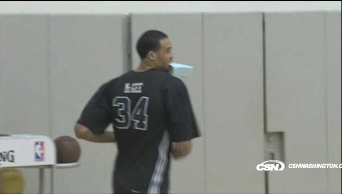