NBA Lockout: Things We'll Miss About The Wizards With A Work Stoppage

The prolonged NBA lockout means we probably won't see the Washington Wizards this season. So, what will we miss the most? Besides the uniforms, of course.

Share All sharing options for: NBA Lockout: Things We'll Miss About The Wizards With A Work Stoppage

On Monday, the 2011-12 NBA season was put in jeopardy when the NBA players elected to file a disclaimer of interest in order to challenge the NBA lockout in court instead of accepting the owners' offer. This means that NBA fans must prepare for a "nuclear winter," as commissioner David Stern put it on Monday.

It also means that us Washington Wizards fans probably won't be able to watch our favorite team for quite some time. You may be asking yourself, "So what? It's the Wizards. They stink!" Maybe that's true, but even a losing team has its charm and idiosyncrasies. There was a certain character to the Wizards, and that character is something we'll miss.

Therefore, our own Michael Katz and Mike Prada decided to list some of the things we'll miss about the Wizards this season. We also solicited some reader input and put the best answers at the end. In no particular order, here's what we'll miss this season. 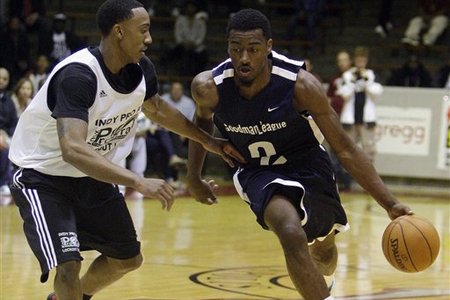 John Wall — To embrace John Wall fully is the way to shout, "I'm a Wizards fan!" What does it mean to be a Wizards fan without without a season, without the games, without Wall playing basketball -- doing anything -- in Wizards apparel? -- Michael Katz

New Uniforms — Let's be honest: the new Wizards look unveiled last May is pretty snazzy.  If there was no lockout, at least the Wizards would look good while losing.  Now, we're forced to remember the sad, boring straight-blue colors that did nothing to brighten our days in the dark winter of a rebuilding team. -- Mike Prada

Chipotle Burrito Dash — That moment when a Chipotle Fan Patrol team member connects with you and by some miracle delivers a from-outer-space burrito for an impromptu feeding frenzy. It'll make a person do strange things. -- M.K. (Photo Credit: Friend of the Blog Kyle Weidie at the excellent Truth About It)

Get to Know: Jan Vesely — In what proved to be general manager Ernie Grunfeld's first difficult decision, he elected to stay put and pick Jan Vesely instead of making a move up in the draft. Vesely can certainly dunk and he has plenty of professional experience, but he's not a great ball-handler or shooter and wasn't an especially great rebounder either.  If he works out, it'll accelerate the Wizards' rebuild.  If not ... well, at least we can still remember "The Kiss." -- M.P.

Nick Young's Wackiest Haircut: Nick Young's just a boy with a new haircut / and that's a pretty nice haircut ... The Wizards shooting guard has been known to blow his hair out or twist it into Allen Iverson braids. Will these hair updates be as exciting via Young's third-party Twitter photo service? -- M.K.

Jordan Crawford vs. Nick Young — Two flawed shooting guards enter, but only one can be the starter alongside John Wall.  Both have a propensity for putting up shots, but they could not be more different otherwise.  Young has a carefree attitude, has developed into a good catch-and-shoot player, never gets assists and has strong defensive tools.  Crawford is incredibly intense, overdribbles, can pass and struggles on defense.  I'm going to miss those triple-digit comment threads on Bullets Forever the most. -- M.P.

The 2012 Dunk Contest: Revenge is a dish best served with three basketballs at once dunked through an 11-foot hoop. This time, no league sponsor KIA or otherwise will can hold this spaceship down. T-Minus one new CBA until JaVale takes off. See you in 2013. -- M.K.

Which NBA Player Will Make Fun of JaVale McGee — Two summers ago, it was Lamar Odom.  Last season, it was Ron Artest.  This summer, it was Derek Fisher.  Even money says Kobe Bryant is next, right? -- M.P.

Saunders-isms — Wizards coach Flip Saunders is always forthcoming in the press as he pleads for his team to accept even the most rudimentary NBA concepts.  Since coming aboard, he's repeated so many cliches and idioms that he could fill up some snarky blogger's tumblr account in no time.  I can neither confirm or deny that I would have created that Tumblr had the lockout not been in effect. -- M.P.

John Wall's Jump Shot: In his rookie season, Wall shot 28.6 percent from between 10-23 feet from the basket, according to Hoopdata.com. He said he's been putting up 2,000 shots a day during the lockout and it's shown with an improved stroke during loosely-organized pro-am games. Of course, there's limited footage from him in a more professional setting (below). -- M.K.

When Will John Wall Dougie? —  His highlight-filled summer gave him plenty of time to celebrate, after all. -- M.P.

No More Preseason Gilber Arenas Storylines — Can Gilbert Arenas and John Wall coexist in the same backcourt? WE WILL NEVER NEED TO ANSWER THIS QUESTION. If last season was a franchise reboot, the Wizards are now entering an official fresh start, you know, whenever basketball starts again. -- M.K.

JaVale McGee, Point Guard — In October and November, this drives fans nuts. By April, the same fans "Ooh" and "Ahh" at the expense of sanity while watching McGee embrace his inner points guard at the expense of offensive efficiency. Wizards fans wants wins, but for now this will do.

Bring back the NBA and we'll live with planking, too. Promise. -- M.K.

Mike Bibby Continues Storied Wizards Career — OK, just kidding. This lockout is getting to us. -- M.K.

We also asked you, dear reader, for your input on SB Nation DC's Facebook and Twitter feeds. Here's what YOU said:

Got one to add? Drop it in the comments. Let's grieve together.