Wizards Training Camp 2011: No Holiday Gifts For Players This Season

Share All sharing options for: Wizards Training Camp 2011: No Holiday Gifts For Players This Season

WASHINGTON, D.C. - Last season, Wizards coach Flip Saunders handed out iPads with Washington's playbook loaded onto it. It was rad. JaVale McGee changed his background to this picture of himself dunking on David Lee, which was rad, too.

But so far this holiday season, no gifts. So what gives?

"We didn't get nothing special this year. I dunno. I don't know what to tell you about that," Andray Blatche said.

"This might be a good look for us. Trying to humble us," he added.

Hm: Could the Wizards be motivated by the promise for free gadgets? This just might work. ...

Or maybe there was just no time to wait in line at the Apple Store with a tight, post-lockout schedule.

"Everything's so quick, and so, that's going to be i think more kind of a work in progress," Saunders said. "We're putting all those things together. The other thing is we're working on a lot of other things. so that's going to come down the road."

Hear that, Dray? There could be more iPads in the future!

In the meantime, Blatche will just have to get by with the finer non-tech things in life. 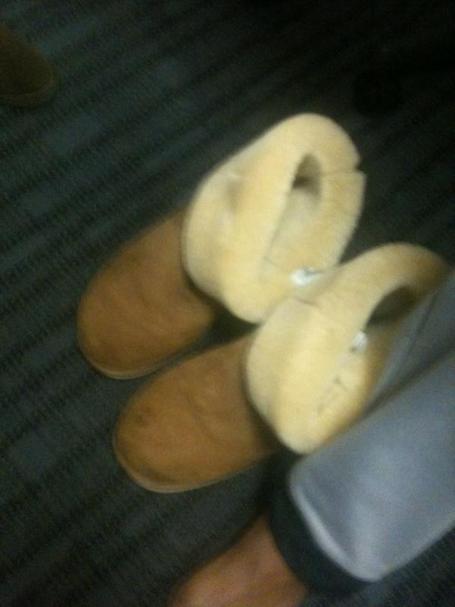 Much warmer than an iPad.

For comprehensive coverage from Wizards training camp, which began on Friday night, stick with SB Nation DC's Wizards team page and our Wizards blog, Bullets Forever. We'll have everything from stupid jokes (like this) to actual analysis (like this).