Andray Blatche Is Not Making It Any Easier On Himself

Share All sharing options for: Andray Blatche Is Not Making It Any Easier On Himself

Andray Blatche slept on the frustration he had on Monday night about where he got the ball in the Washington Wizards' offense, and he apparently is still frustrated. Here's the tweet he just fired out to cyberspace. 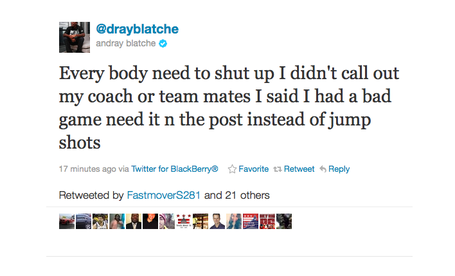 Maybe he's not calling out the Wizards' general game plan, but he is clearly calling out its execution last night.