It's never too early to think about the 2012 NBA Draft, especially because most believe the Washington Wizards will once again be one of the worst teams in the NBA. That's not the end of the world for most fans, because we all understand this rebuilding effort may take some time. But it also means that we shouldn't necessarily be excused for looking at the college game over the pro game every once in a while.

Saturday's noon showdown between No. 1 Kentucky and No. 5 North Carolina is one of those times. There are as many as 12 NBA prospects that will see action for both teams, and it's not out of the question to imagine some of them in Wizards colors. Here are the five players in the game Wizards fans should be watching especially closely.

5.  Michael "Kid" Gilchrist: A rugged small forward that isn't afraid to mix it up inside, Gilchrist projects as an elite defender on the next level. The question is whether he can develop an outside shot to complement his slashing ability.

3. Terrence Jones: Kentucky's top returning scorer is often a force defensively, and he can be a matchup problem as a combo forward on offense. He does have a tendency to exhibit questionable shot selection, and he does often take himself out of the game.

2. Harrison Barnes: Everyone seems to love Barnes' big-shot ability and his intangibles, and you can imagine how he fits in perfectly on the wing with John Wall. He still has to answer questions about whether he can be strong enough to drive on more physical defenders. Going against Gilchrist and Jones (if he plays small forward) will be a good test for him.

1. Anthony Davis: The player many believe will be next year's No. 1 pick. A big man who plays like a guard, and does it effectively. Also: beware the brow. 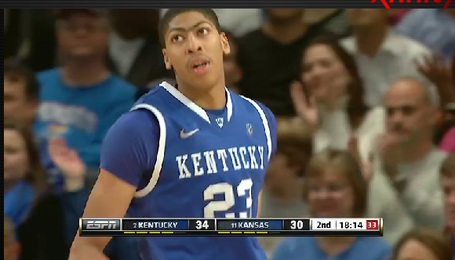