John Wall won MVP honors in the 2011 T-Mobile Rookie Challenge mostly because he dished out a Challenge-high 22 assists in leading the Rookies to a 148-140 win. Here was one of those assists - a bounce-pass alleyoop to fellow high-flyer Blake Griffin.

I'm pretty sure that's the first ever bounce-pass alleyoop in the game's history. Surely, it's been done in some actual NBA game, but I doubt it's been done in an exhibition game like this. Chris Webber went crazy on TNT, Amar'e Stoudemire bowed down to Wall and Wall began doing his patented Dougie as the TV cut to the commercial.

There was also an awkward moment when Wall won the MVP award over his Kentucky teammate DeMarcus Cousins. Craig Sager was asking his typical softball questions, but managed to sneak in a little dig at Cousins that didn't go over well with Wall. Sager joked (I think) that Cousins gets angry when he doesn't get the ball, which prompted this face from Wall below the jump. 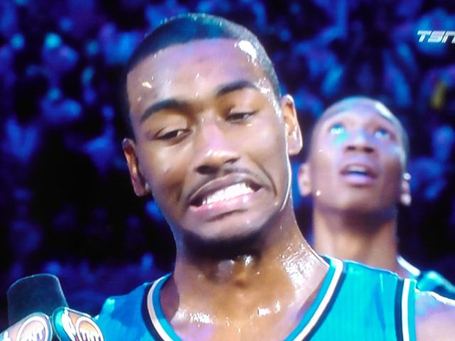